We are pleased to announce release 1.3.0 of NGINX Ingress Controller for Kubernetes. This represents a milestone in the development of our supported solution for Ingress load balancing on Kubernetes platforms, including Amazon Elastic Container Service for Kubernetes (EKS), the Azure Kubernetes Service (AKS), Google Kubernetes Engine (GKE), Diamanti, IBM Cloud Private, Red Hat OpenShift, and others.

NGINX Ingress controller for Kubernetes is a daemon that runs alongside NGINX Open Source or NGINX Plus instances in a Kubernetes environment. The daemon monitors Ingress resources (requests for external connectivity) for services deployed in Kubernetes. It then automatically configures NGINX or NGINX Plus to route and load balance traffic to these services.

Multiple NGINX Ingress controller implementations are available. The official NGINX implementation is high‑performance, production‑ready, and suitable for long‑term deployment. Compared to the community NGINX‑based offering, we focus more on maintaining stability across releases than on feature velocity. We provide full technical support to NGINX Plus subscribers at no additional cost, and NGINX Open Source users benefit from our focus on stability and supportability.

Prometheus is the most commonly deployed monitoring and alerting system in Kubernetes environments. Release 1.3.0 adds support for a lightweight Prometheus exporter which publishes metrics from the NGINX Plus API for consumption by Prometheus.

Helm is an optional package manager for Kubernetes, and we added a basic Helm chart in release 1.2.0. This release improves the Ingress controller Helm chart with a number of additions, including the ability to:

Mergeable Ingress resources enable you to publish a single “master” Ingress resource which defines a virtual server, along with optional TLS parameters, and to then merge “minion” resources into the master. A minion resource contains the path definitions for a particular virtual server. Multiple minions can be deployed, and NGINX Ingress controller automatically merges these with the master to create a single configuration.

In addition, any annotations that are defined at the global level within a minion only apply to the paths defined by that minion, making it much easier to customize the Ingress policy for each path independently.

This means that if several teams wish to publish their services through the same listen port, they do not need to coordinate to create a single Ingress resource. They can instead develop their Ingress resources and policies independently, and NGINX Ingress Controller merges them automatically.

With release 1.3.0, it’s now possible to customize these templates using a ConfigMap. This is a more convenient alternative to baking the templates into the Ingress controller container image and redeploying it each time you need to change the templates. You should find this useful in a development environment, where you need to make modifications to the templates and test them quickly.

For more information, please refer to the custom templates documentation.

NGINX Plus health checks run the standard Kubernetes readiness probes, sending requests to a defined URL on each pod of a service and verifying that the response meets predefined criteria.

Check out the NGINX Plus Health Checks documentation for an example.

The status metrics for an Ingress resource now include the public address (IP address or DNS name) of the Ingress controller, through which the services of that Ingress resource are publicly accessible. This address is now reported in the ADDRESS column of the output from the kubectl get ingress command, as shown below:

See the documentation for configuring this feature.

Getting Started with the Ingress Controller

If you’d like to find out more about NGINX Ingress Controller for Kubernetes, check out these resources:

The main design goal of NGINX Ingress Controller is to maintain performance and compatibility across releases. We provide full technical support to NGINX Plus subscribers at no additional cost, and open source users also benefit from the focus on long‑term stability and supportability.

Webinar: Getting Started with the NGINX Ingress Controller 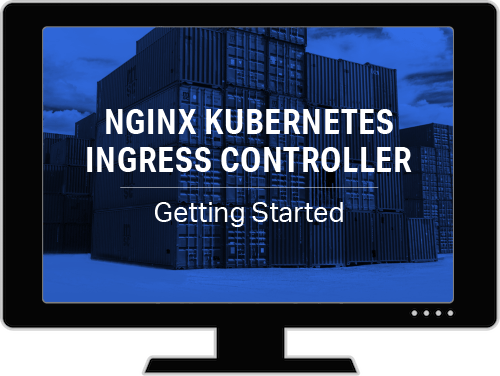 Learn how to load balance, route traffic to, and secure applications on Kubernetes, with NGINX