The API management (APIM) market is a crowded space. The latest Gartner Magic Quadrant for Full Life Cycle API Management ranks 22 vendors, with 7 in the Leaders quadrant. Competing in an existing market requires establishing a strong position to differentiate and stand out from the competition. So what makes NGINX’s API management solution different?

At NGINX our goal is to make lightweight, high‑performance software. NGINX Open Source has become the go‑to web server for the world’s busiest sites because its event‑driven architecture scales better than web servers that spawn a process or thread for each connection. NGINX Open Source is also the industry’s most ubiquitous API gateway, an infrastructure component that processes API traffic in APIM solutions like those from Apigee, Axway, IBM DataPower, Kong, Red Hat 3scale, and Torry Harris.

The NGINX Controller API Management Module is a high‑performance APIM solution. In this blog we’ll compare its performance to Kong, a competitor known for its high performance. Kong is built on NGINX, and uses Lua to implement its API functionality, whereas the API Management Module relies completely on native, high‑performance capabilities that are implemented as NGINX Plus modules. NGINX’s API management solution is built on an innovative architecture that decouples the data plane and control plane. All API calls are handled directly by NGINX Plus acting as the API gateway (data plane) without requiring any interaction with the control plane. This results in high‑performance API traffic mediation for both north‑south and east‑west traffic.

A sneak peak at the results: the NGINX Controller API Management Module outperforms Kong by 2x.

A special thank you to Intel for providing the hardware and lab space used to do this testing. Full test and hardware details can be found in the Appendix.

Latency Added to a Single Request

In this test we compared the additional latency introduced by the API manager to a single request, for files of 0 KB and 1 KB in size. We used curl to send the single HTTP request (details).

Kong increases latency compared to the API Management Module: by 44% for a 0-KB file and 24% for a 1-KB file.

A standard HTTP scalability metric is requests per second (RPS). The equivalent metric in the context of APIM is API calls per second. We used wrk to send a continuous stream of requests for either a 0-KB or 1-KB file, on 300 connections for 3 minutes (details). 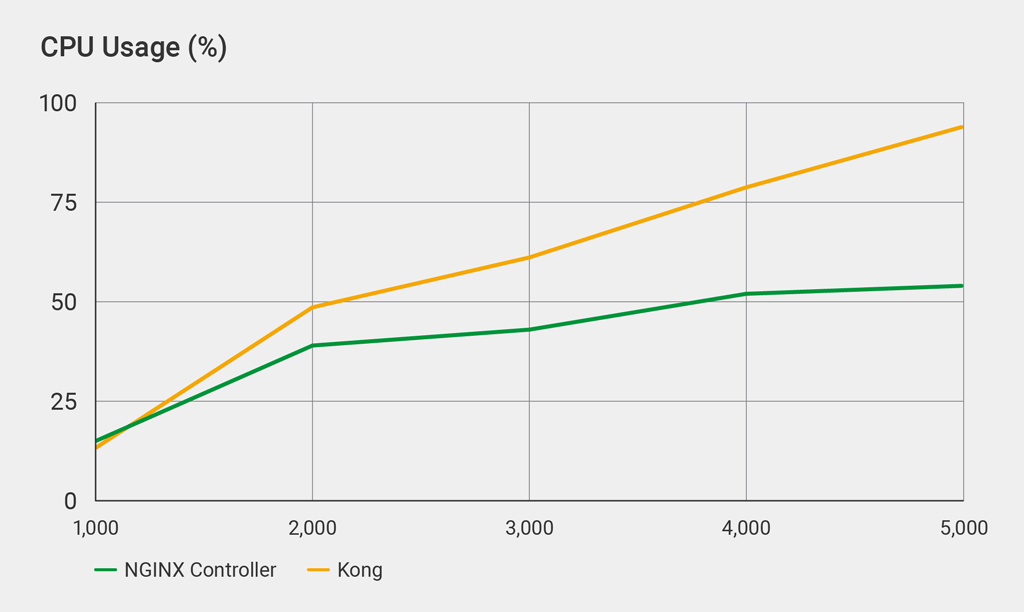 API Calls Per Second with JWTs

The final test measures how well each API gateway validates JSON Web Tokens (JWTs), the preferred method for authenticating API requests. Your most important API endpoints will likely be authenticated, so this test more closely approximates a real‑world configuration.

We used the same JWT, signed using HS256, with both gateways (details).

The API Management Module handles more than 2x as many JWT‑authenticated API calls per second as Kong.

NGINX Controller is a control‑plane solution that manages the NGINX Plus data plane. NGINX Controller enables you to manage the entire lifecycle of NGINX Plus, as a load balancer, API gateway, or a proxy in a service mesh environment. With NGINX Controller’s API Management Module, you can define, publish, secure, monitor, and analyze APIs. 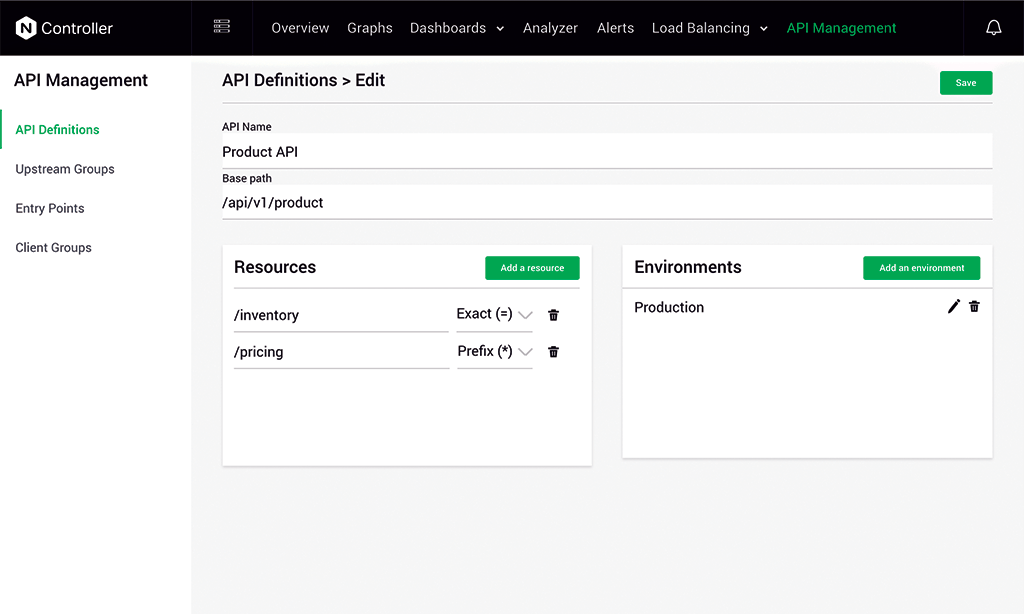 Under the hood, NGINX Controller generates NGINX Plus configuration which is published to the underlying NGINX Plus data plane. The core configuration loader has a very efficient mechanism for storing configurations in memory, enabling the API Management Module to deliver high performance for APIs.

Many companies already use NGINX Open Source as their API gateway. Capital One has been able to scale to over 12 billion API calls per day using NGINX Open Source. In fact, many of our competitors, including Kong, use NGINX Open Source under the hood in their APIM solutions. Our lightweight design – based on native, high‑performance NGINX configuration along with NGINX Plus modules – enables the API Management Module to scale better than NGINX‑derivative competition.

The following hardware was used for the testing. All three machines were identical. Hyperthreading was not used. In previous testing we did not observe a major difference in performance from hyperthreading.

The following software was used to do the testing:

The following NGINX configuration was used for the testing.

We made the following settings to maximize performance. As detailed in the next section, we made similar settings in the Kong configuration.

We ran the following Kong API calls to create a route to the API server. The first command creates a service named test and the second creates the route /test pointing to the server.

The following commands display the configuration of the service and the route, respectively. We pipe the output to the jq tool to make it easier to read the JSON output.

Latency Added to a Single Request

The chart in Latency Added to a Single Request shows time_total, in milliseconds. Here’s a sample output:

We tested API calls per second with wrk, a scalable benchmarking tool we use often. We tried various combinations of parameters, and this one maximized performance for both the API Management Module and Kong:

The command creates 22 wrk threads (1 per core) and a total of 300 connections across the threads. The -d parameter specifies the duration of the test, in our case 180 seconds (3 minutes). Sample output:

We tested CPU usage with mpstat (a standard Linux tool for that purpose) while running the wrk command for API calls per second. Sample output (spread across two lines for legibility):

API Calls Per Second with JWTs

We tested JWT performance with the wrk command for API calls per second, with the addition of the -H parameter to insert the JWT in the Authorization: Bearer HTTP header. We generated the JWT and JSON Web Keys (JWKs) using the instructions in this blog post, storing the JWT in a file named test.jwt. 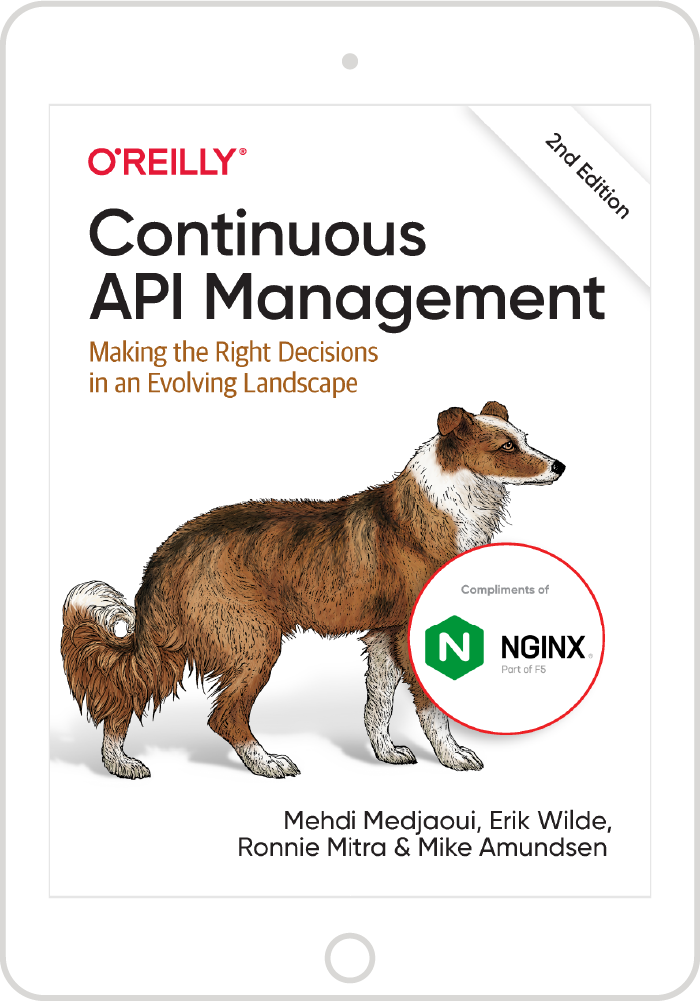 Download this O’Reilly ebook to learn how maximize the value of APIs by managing them as products through a continuous lifecycle.