NGINX Dynamic Modules: How They Work 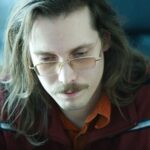 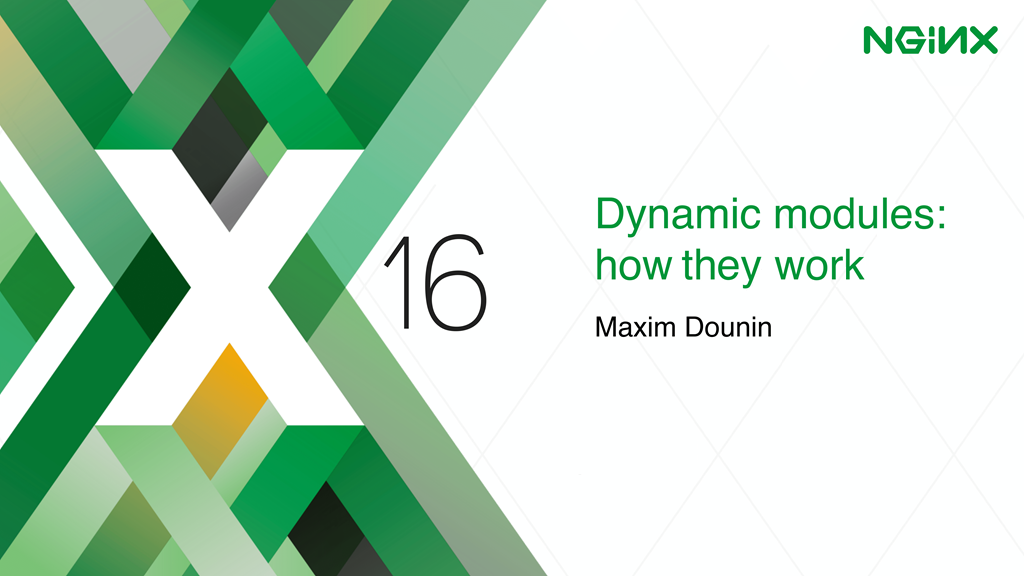 This post is adapted from a presentation delivered at nginx.conf 2016 by NGINX, Inc. developer Maxim Dounin. You can view a recording of the presentation on YouTube.

Maxim Dounin: My name is Maxim Dounin, and I am an NGINX developer. Today, I would like to talk about dynamic modules, which we introduced last winter.

First, let’s review some basics about modules in general, and dynamic modules in particular.

As you probably know, modules in NGINX have existed since its inception. In fact, NGINX is actually a collection of modules. Even very basic functions like HTTP, or serving static files inside HTTP – these basic things are modules.

You can extend NGINX by adding your own modules. The modular architecture allows you to easily modify NGINX. I think it’s a very important part of NGINX. It’s what makes it so good, and so successful.

Last winter, we introduced dynamic modules. You can now load modules into a compiled NGINX binary, without recompiling NGINX itself. Dynamic modules were the result of a joint effort by myself and Ruslan Ermilov. 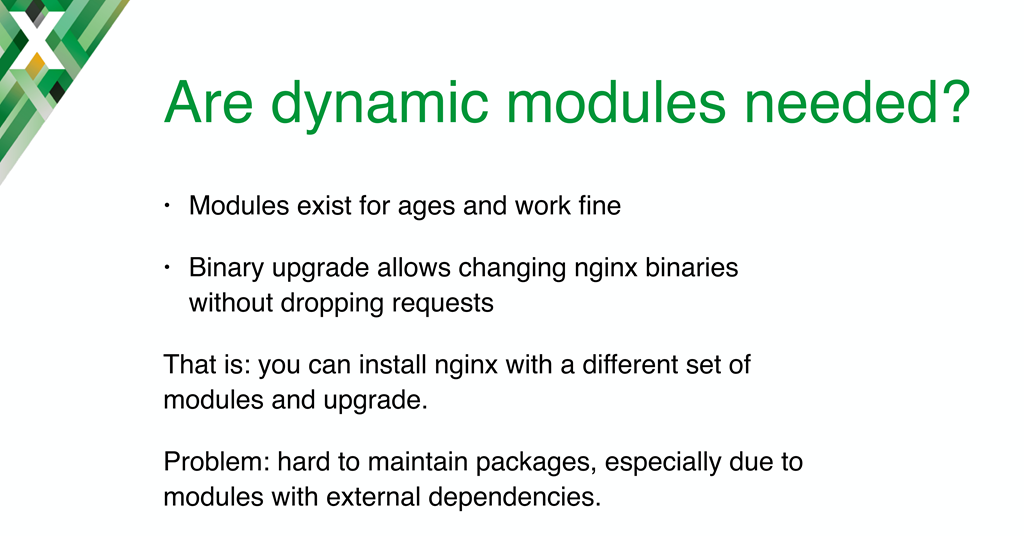 Why are dynamic modules needed?

Normal static modules have existed for ages, and they work fine. Moreover, NGINX has a very useful and cool feature. You can change the binary in place, without dropping any requests. This feature is normally used for upgrades, but you can also recompile NGINX with a different set of modules and just switch to a different binary. Changing sets of modules is not a problem.

Let’s now take a look at some implementation details. We’ll look at some of the more interesting things we encountered while implementing dynamic modules.

First of all, we decided that implementation should be simple.

There are a lot of high‑value third‑party modules and we can’t just force all developers to change their modules and make life hard for them. So, it was important to minimize required changes to modules.

So, then we implemented something a bit more complex with the load_module directive in the configuration. Now you could load and unload modules from the configuration, and you didn’t need to rename files, or move files around. 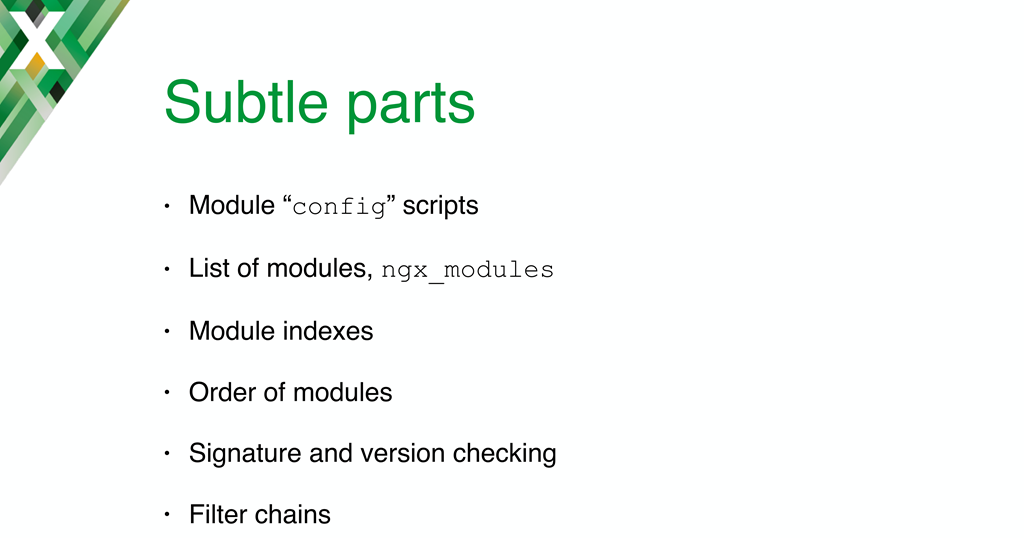 These are some problems we were working on while implementing dynamic loading.

Let’s look at them in order. 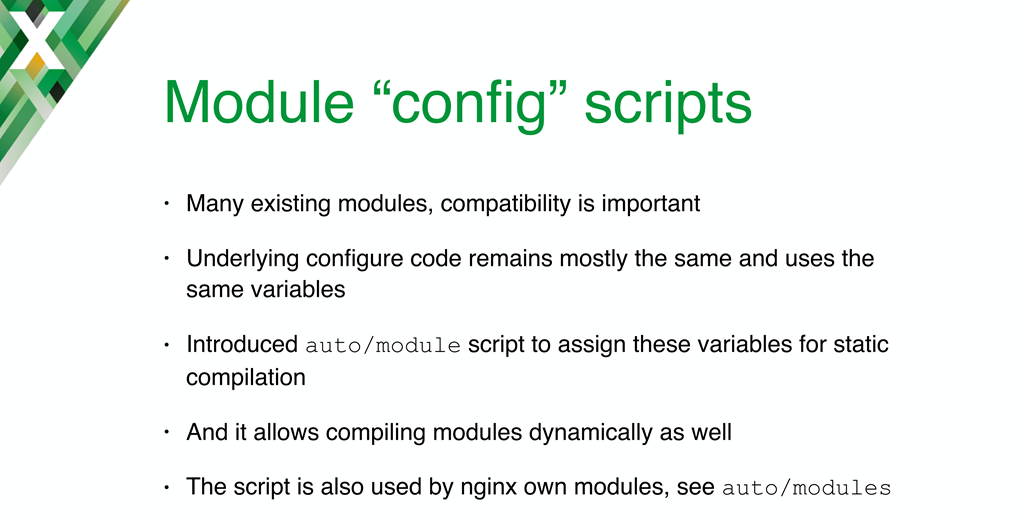 First, module config scripts. This was probably the most complex part from an implementation point of view.

There are many existing modules and compatibility is very important. You don’t want to break things. So, we had to provide compatibility with all modules.

A bit later we’ll take a look at how to do this for a sample module. It’s quite trivial.

The second problem regards a list of modules inside NGINX. It’s set with a global variable, ngx_modules. 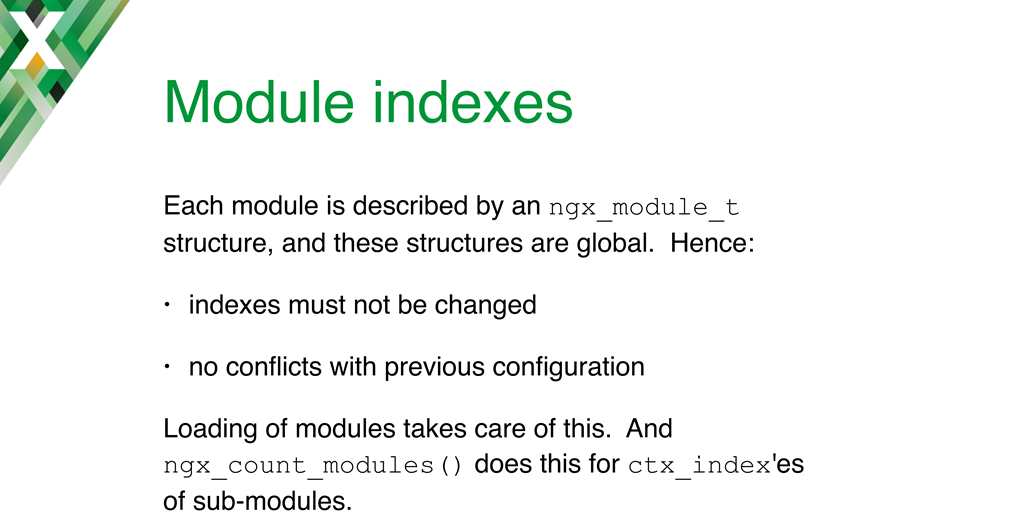 Another problem is module indexes.

Each module is described by a global structure, ngx_module_t. This means that indexes that are stored within the structure cannot be changed. If the index is assigned, you can’t change it later.

This is something the NGINX core takes care of while loading modules, and we’ve introduced the ngx_count_modules() function to assign ctx_indexes for complex modules.

The next issue is the order of modules.

The order is important in some cases, especially if you write a filter. For example, gzip must happen before writing the data to a client. Both these tasks are done by filters, so you have to specify the appropriate order for the filters to run in.

The next problem is that NGINX uses conditional compilation on various structures.

NGINX doesn’t compile some fields of the structures which are not used in a particular compilation. And there’s no API layer between these structures and the modules. The structures are essentially a part of our API. So, if you try to load a module that was compiled with a different set of configuration options, it will likely segfault because it assumes a different structural layout.

NGINX checks if the module was compiled with the same options. If it was compiled with a different set of options, NGINX refuses to load the module. We have managed to implement this in an existing macro, so no changes to modules are required at all. It just seems to work like magic.

A similar issue is version checking.

The same problem with structures happens when you switch from version to version: segfaults happen when loading a module compiled with a different NGINX version.

Therefore, while loading modules, NGINX checks the version the module was compiled with. 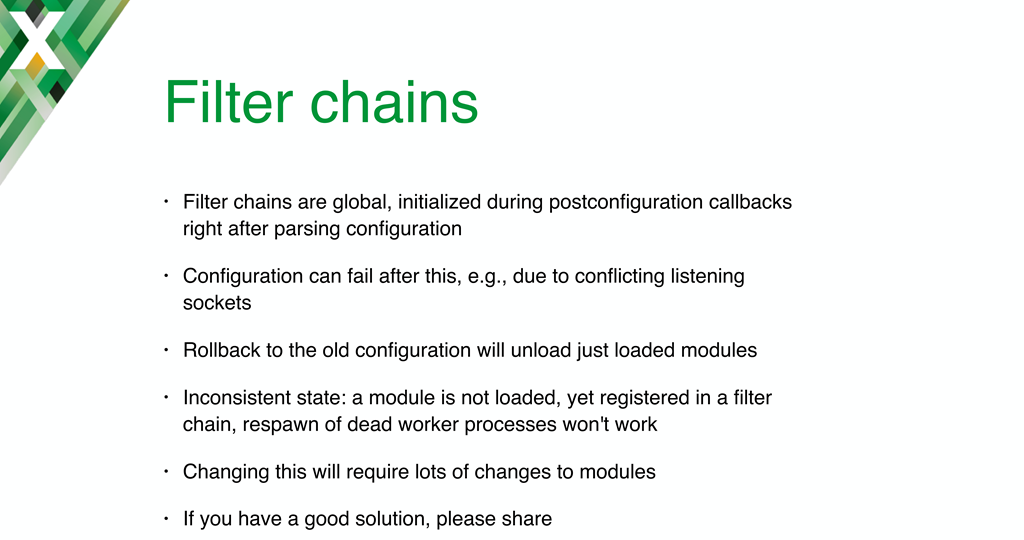 The last problem is filter chains.

This is not fatal, as a master process doesn’t call filters itself. Normally, it will just change the configuration, build another filter chain, and will spawn new workers with correct configuration and filter chains.

But there’s one small case when this can be a problem. If a worker process dies, NGINX tries to respawn the worker with the current master state. This state is inconsistent, so the worker dies too because it is referencing a module that’s not loaded. This problem requires reimplementing filter chains in a way that is specific to each configuration.

Because this happens only in some very specific cases, we’ve left things like this; fixing it would require too many changes to modules. If you do have a good solution, please let us know. 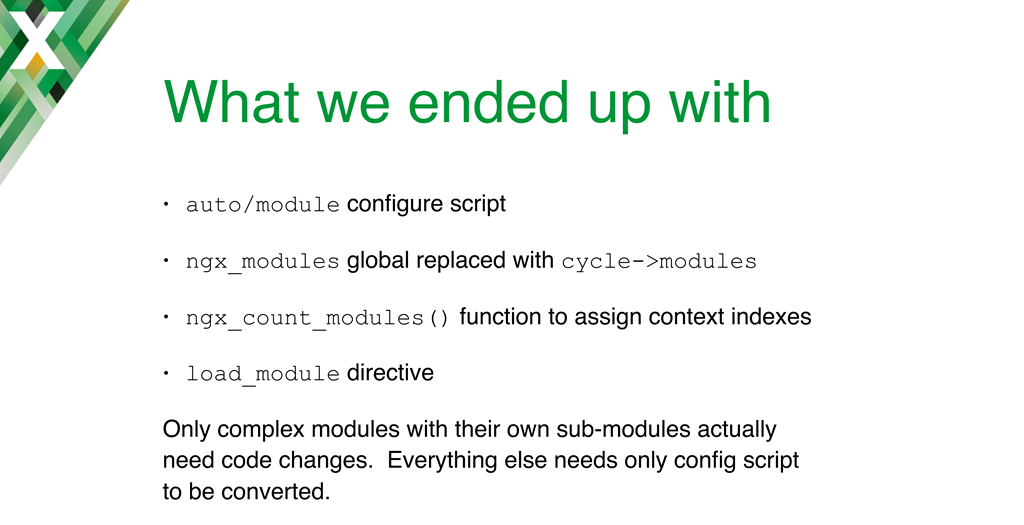 What we ended up with is the auto/module configure script, the ngx_modules global variable replaced with cycle->modules, the ngx_count_modules() function to assign context indexes for complex modules, and the load_module directive.

All previous modules continue to work fine, and most modules can be easily converted to dynamic loading with just a few simple changes.

Let’s look at what’s needed to convert a module for dynamic loading. There are actually just three simple steps for all modules. And in most cases, only one is required. 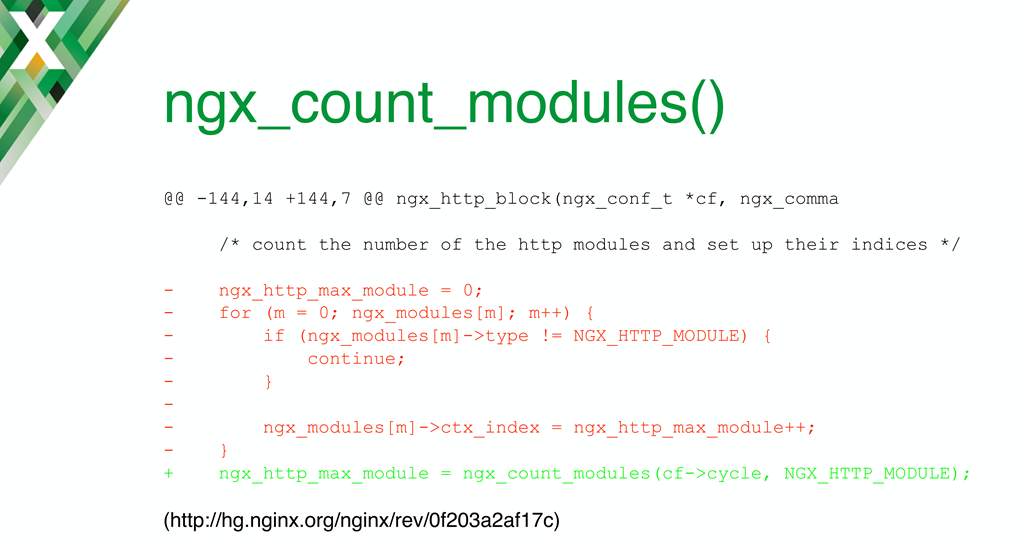 Let’s start with the most complex case.

Here’s an example from NGINX itself: how to count modules. It basically replaces a loop in the code with a function call. 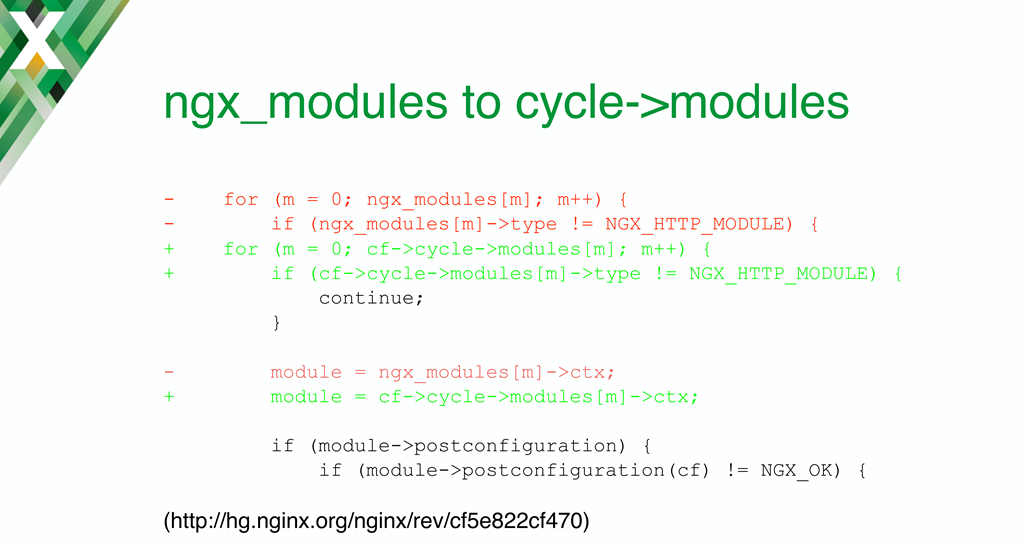 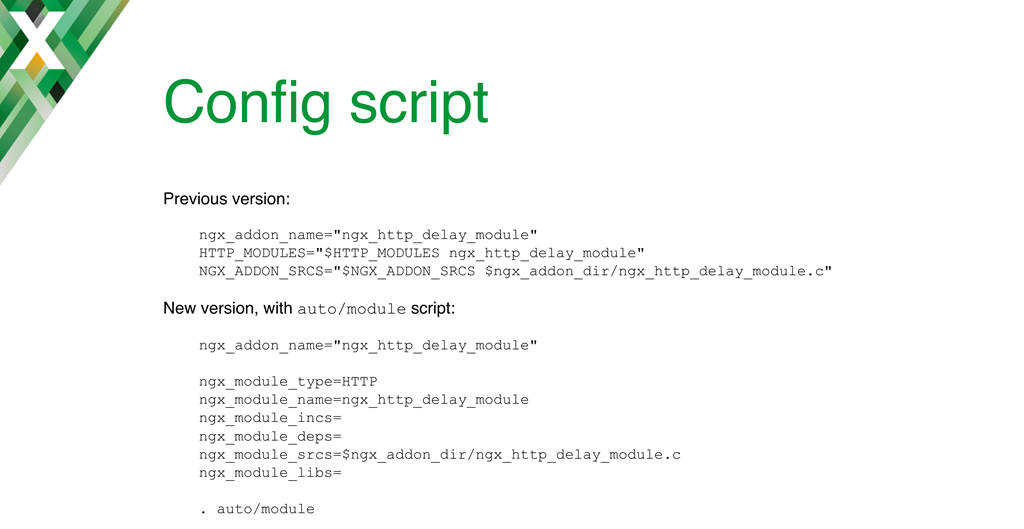 Here is an example for a simple module. The original version uses global variables. It specifies a domain, HTTP modules, and add‑on sources.

That’s all you need to do in this case. 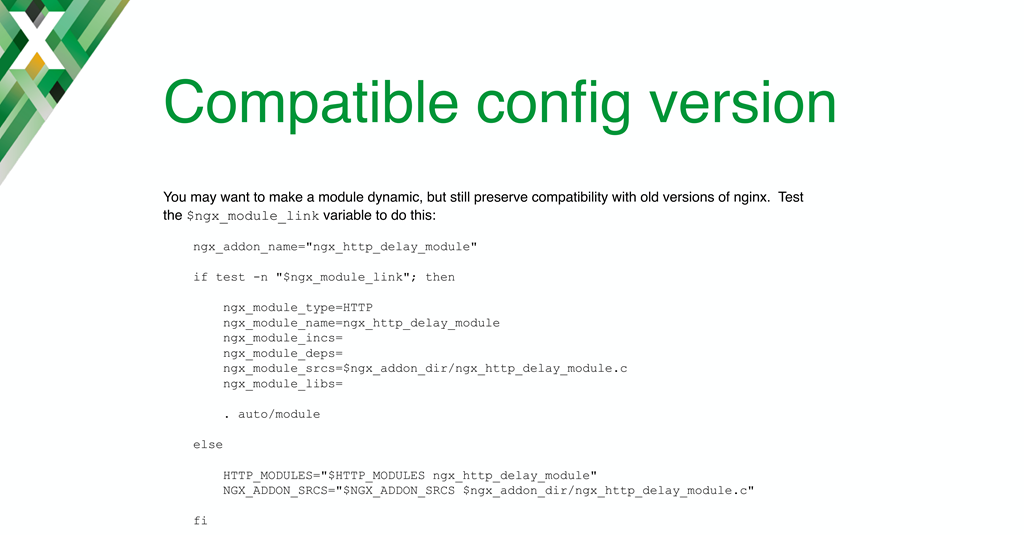 In some cases, you may want to provide compatibility with previous versions of NGINX.

This can be easily done by testing for the ngx_module_link variable. If it’s set, you use the new version. If it’s not set, you use global variables as in previous versions. 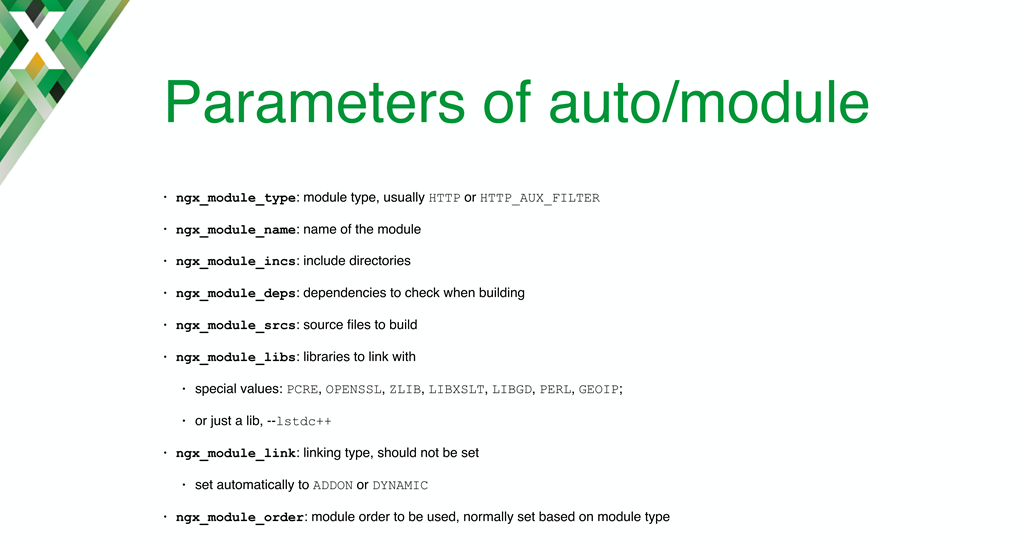 Here’s a short list of parameters for the auto/module script. You can specify module type, usually HTTP or HTTP_AUX_FILTER, the name of the module, include directories, dependencies to check when building, sources, and libraries.

Some special values are recognized for libraries NGINX knows how to build. You can also just provide a link of flags like NGINX’s own test C++ module.

There are a couple more variables I haven’t showed yet. One is ngx_module_link, which specifies linking types; do set it directly. NGINX expects to set it itself before calling the config script.

The order of modules to be used is normally set based on module type. You don’t need to worry about it unless you are doing something specific. 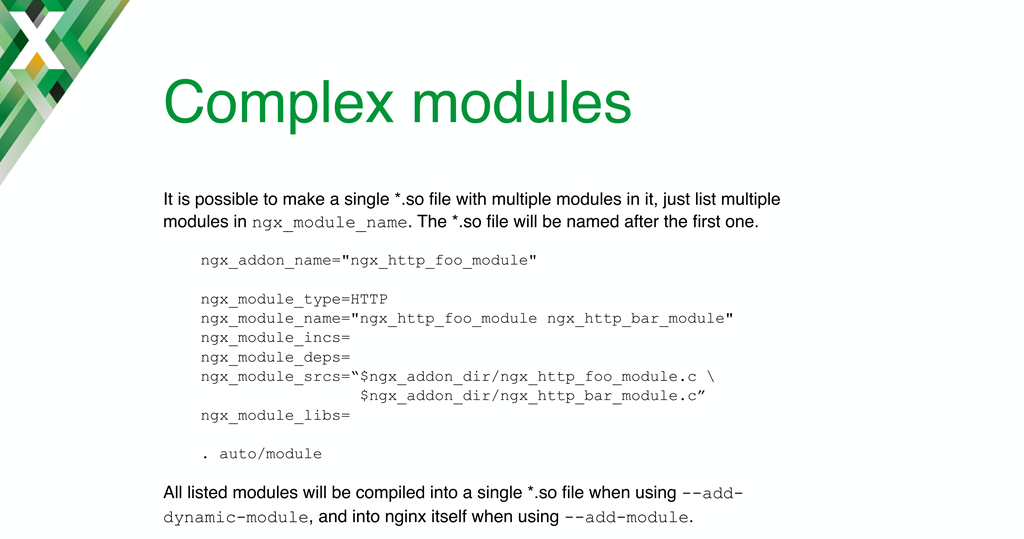 It is also possible to compile many modules into a single, shared object file.

Now, let’s take a closer look at how module loading works, how it happens, and the results.

The load_module directive calls dlopen(). Later, when the configuration is freed, dlclose() is called.

What happens when you reload the configuration?

This is a good thing, as it means you can even remove the module file itself, and NGINX doesn’t notice. You can still reload the configuration when needed.

It allows you to replace the NGINX binary and NGINX modules in any order. You can still reload the configuration if needed. 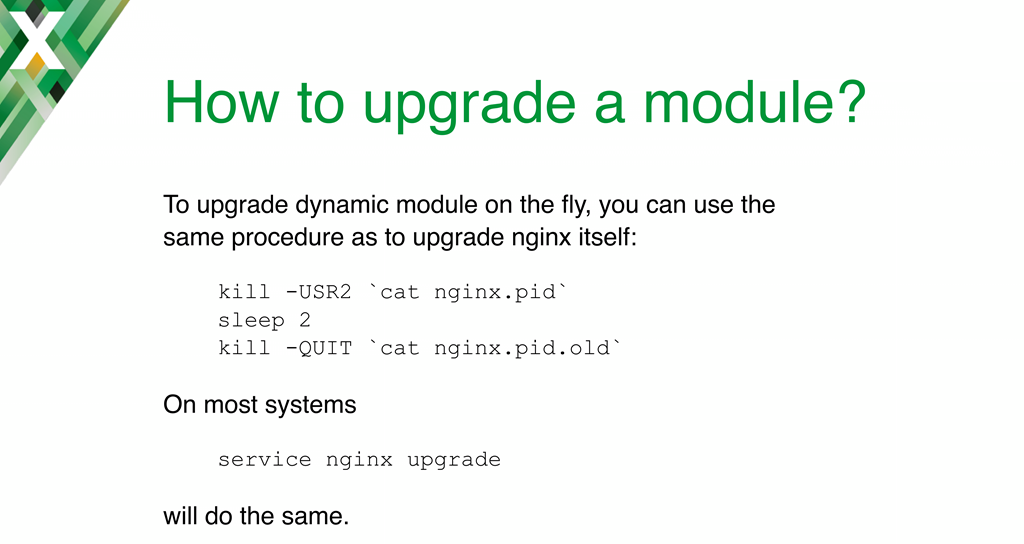 The last topic I wanted to talk about today is further improvements. These are things we are still working on and would like to share with you. 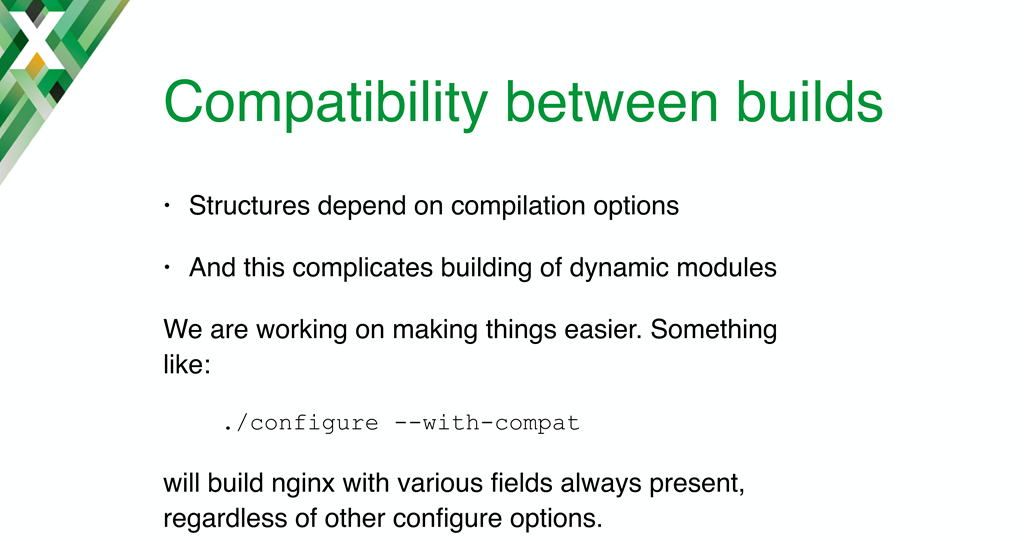 This is actually related to signature checking. It’s a pain to compile dynamic modules if you do it outside of NGINX itself. You have to use the same configure options, or signature checking prevents you from loading the module.

We are currently working to make this easier. With a special option to configure, perhaps something like --with-compat, NGINX will just compile in all the structure fields it knows about, so that modules will be compatible even with different configure options. You will be able to load them even if you compile NGINX and the module with a different set of configure options.

24:27 Compatibility with NGINX Plus

Closely related to that is compatibility with NGINX Plus.

Right now, it is not possible to load a module compiled for NGINX into NGINX Plus, because of signature checking, and the incompatibilities between structures.

We are working to make that possible.

[Editor – Binary compatibility for NGINX Plus was introduced in NGINX Plus R11 and NGINX 1.11.5.]

Thank you for your attention. If you have any further questions about dynamic modules, feel free to contact me. 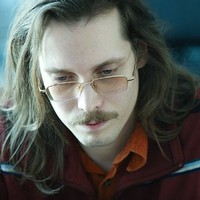