NGINX Plus & Elasticsearch: Better Together

Elasticsearch is an advanced, high‑performance, and scalable open source search engine that provides full‑text search and real‑time analytics for structured and unstructured data. Its features are available using a RESTful API over HTTP, making it easy to fit into modern web architectures. Because NGINX Plus load balances HTTP traffic with outstanding performance at very high concurrency rates, it’s ideal for use as a reverse proxy load balancer as you scale up to more than one Elasticsearch server.

Editor – The first Elasticsearch User Conference – Elastic{ON} – took place at Pier 27 in San Francisco on March 9–11, 2015, shortly after the original publication of this blog. It was the single largest gathering of Elasticsearch, Logstash, and Kibana expertise anywhere in the world at the time. NGINX, Inc. was a conference sponsor.

For more about Elasticsearch with NGINX Plus, see Monitoring NGINX Plus Statistics with ELK on our blog.

The Advantages of Deploying NGINX Plus with Elasticsearch

Elasticsearch has a few features designed for scalability, but you can free up resources on your Elasticsearch servers by offloading the load balancing of requests to NGINX Open Source or NGINX Plus, which has even more enterprise‑grade features. 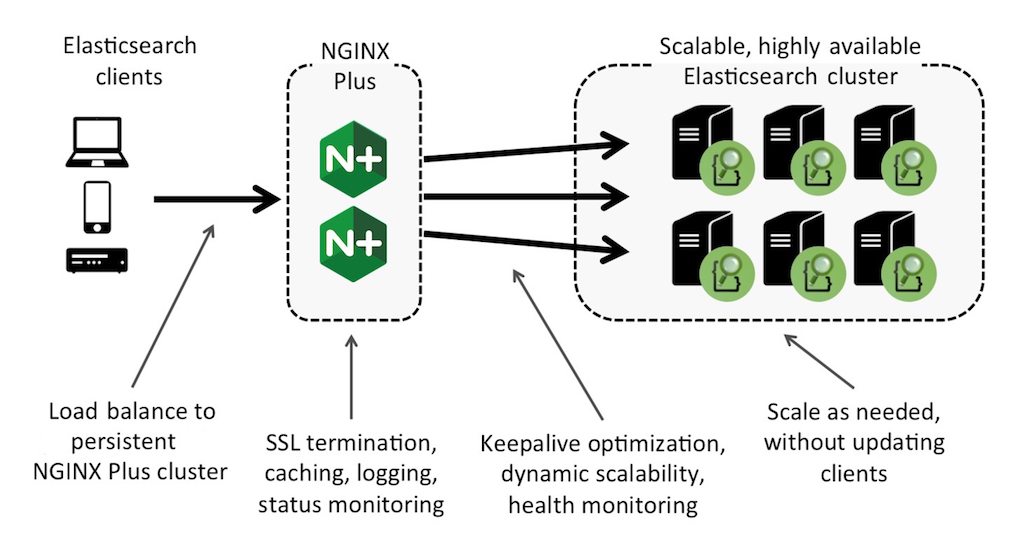 In addition to logging each API request, NGINX and NGINX Plus:

Deploying NGINX Plus with Elasticsearch

Deploying NGINX Plus with Elasticsearch is very straightforward. The directives in the following sample NGINX Plus configuration define settings for load balancing two Elasticsearch servers:

Elasticsearch, a powerful and flexible search engine, and NGINX Plus, an enterprise‑grade application delivery platform, fit naturally together as components of a modern scalable web architecture. As software products, they provide the same features and functions wherever you install them: on bare‑metal servers, in virtual machines, in the cloud, or in containers.

To try out NGINX Plus with Elasticsearch for yourself, start your free 30‑day trial of NGINX Plus today or contact us to discuss your use cases.

Playing HTTP Tricks with Nginx on the Elasticsearch blog

Monitoring NGINX Plus Statistics with ELK on our blog