Using NGINX Plus and NGINX to Authenticate Application Users with LDAP

The solution takes advantage of the ngx_http_auth_request_module module in NGINX Plus and NGINX, which forwards authentication requests to an external service. In the reference implementation, that service is a daemon we call ldap‑auth. It’s written in Python and communicates with a Lightweight Directory Access Protocol (LDAP) authentication server  – OpenLDAP by default, but we have tested the ldap‑auth daemon against default configurations of Microsoft® Windows® Server Active Directory as well (both the 2003 and 2012 versions).

The ldap‑auth daemon serves as a model for your own “connector” app, which you might write in other languages, deploy with different authentication systems, or both. The NGINX Professional Services team is available to assist with such adaptations.

How Authentication Works in the Reference Implementation

We assume that if you’re interested in the reference implementation, you already have an application or other resources you want to protect by requiring authentication. To make it easier to test the reference implementation, however, we’re providing a sample backend daemon, also written in Python, which listens on port 9000. It can stand in for an actual HTTP application during testing, by prompting for user credentials and creating a cookie based on them. 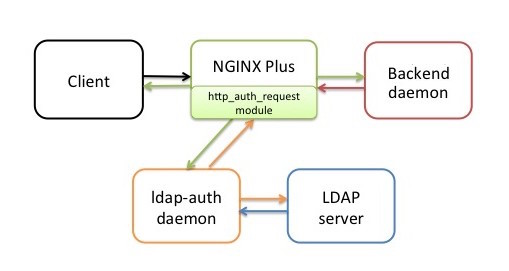 Here’s a step‑by‑step description of the authentication process in the reference implementation. The details are determined by settings in the nginx-ldap-auth.conf configuration file; see Configuring the Reference Implementation below. The flowchart below the steps summarizes the process. 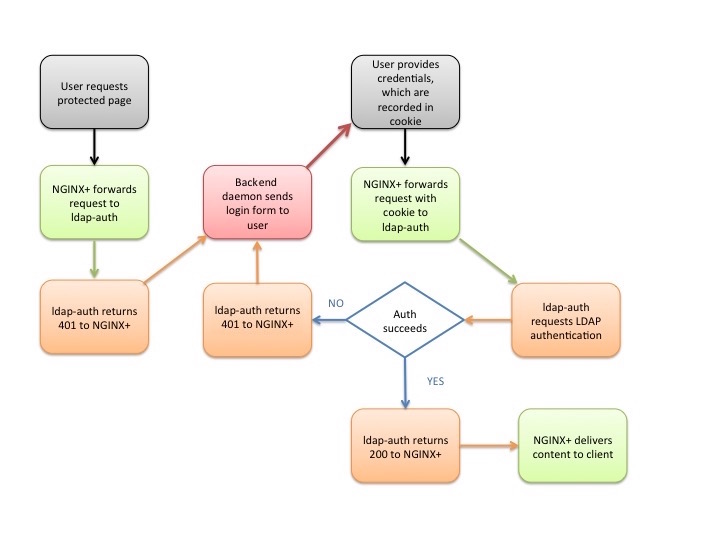 The NGINX Plus configuration file distributed with the reference implementation, nginx-ldap-auth.conf, configures all components other than the LDAP server (that is, NGINX Plus, the client, the ldap‑auth daemon, and the backend daemon) to run on the same host, which is adequate for testing purposes. The LDAP server can also run on that host during testing.

In an actual deployment, the backend application and authentication server typically each run on a separate host, with NGINX Plus on a third host. The ldap-auth daemon does not consume many resources in most situations, so it can run on the NGINX Plus host or another host of your choice.

Make the following changes in the nginx-ldap-auth.conf file. Some are required and some optional, as indicated.

As implemented in nginx-ldap-auth-daemon.py, the ldap‑auth daemon communicates with an OpenLDAP server, passing in parameters to specify which user account to authenticate. To eliminate the need to modify the Python code, the nginx-ldap-auth.conf file contains proxy_set_header directives that set values in the HTTP header that are then used to set the parameters. The following table maps the parameters and headers.

If the backend daemon is not running on the same host as NGINX Plus, change the IP address for it in the upstream configuration block:

If the ldap‑auth daemon is not running on the same host as NGINX Plus, change the IP address in this proxy_pass directive:

IP Address and Port on Which NGINX Listens

If the client is not running on the same host as NGINX Plus, change the IP address in this listen directive (or remove the address completely to accept traffic from any client). You can also change the port on which NGINX listens from 8081 if you wish:

The nginx-ldap-auth.conf file enables caching of both data and credentials. Optionally, you can change the following settings:

To disable caching, comment out these three directives plus the proxy_cache_key directive.

As mentioned above, you can use the ldap‑auth daemon as a model for your own application that accepts requests from the http_auth_request module. If writing an app in Python to communicate with a different (non‑LDAP) type of authentication server, write a new authentication‑handler class to replace LDAPAuthHandler in the nginx-ldap-auth-daemon.py script.

A Note about Security

The backend daemon uses Base64 encoding on the username and password in the cookie. Base64 is a very weak form of scrambling, rendering the credentials vulnerable to extraction and misuse. For authentication to serve any real purpose, you need to use more sophisticated encryption in your backend application.