NGINX Plus vs. Citrix NetScaler: A Price‑Performance Comparison

Editor – For more information about replacing hardware ADCs with NGINX Plus, see our blog post, Migrating Layer 7 Logic from F5 iRules and Citrix Policies to NGINX and NGINX Plus, and deployment guides:

For more details on the metrics, see Performance Metrics.

The metrics for Citrix NetScaler are from a published datasheet and pricing is from two sources: MacMall and this publicly available price list. For NGINX Plus, performance numbers are from the NGINX Plus Sizing Guide and hardware pricing is based on the list prices of Dell PowerEdge servers with the same specs as the Intel hardware that achieved the indicated result in our tests.

Citrix sells three “editions” of NetScaler, charging more for increasingly broad sets of features. The base Standard Edition of NetScaler doesn’t include content caching and compression – mandatory for high‑performance web applications – while NGINX Plus includes caching and compression at no additional cost. For a valid comparison with NGINX Plus, we used the figures from the more expensive Enterprise Edition.

Note: The costs listed in the tables were accurate at the time of publication, but are subject to change over time.

NGINX Plus vs. Citrix NetScaler MPX‑5550

The table compares the entry‑level Citrix NetScaler MPX‑5550 with NGINX Plus running on a similarly sized bare‑metal server, the Dell PowerEdge R220 with a 4‑core CPU upgrade.

As discussed further in Comparing Throughput, the 0.5 Gbps throughput metric for the NetScaler MPX‑5550 is an artificial cap that Citrix imposes. NGINX Plus does not impose any caps, meaning you get to use the full capacity of the hardware you’ve purchased.

NGINX Plus vs. Citrix NetScaler MPX‑8005

The table compares the mid‑level Citrix NetScaler MPX‑8005 with NGINX Plus running on a similarly sized bare‑metal server, the Dell PowerEdge R430 with an 8‑core CPU upgrade.

NGINX Plus vs. Citrix NetScaler MPX‑8600

In each of our three comparisons, the Citrix NetScaler and NGINX Plus systems boast roughly equal performance for HTTP requests per second and SSL/TLS transactions per second – though NGINX Plus achieves those numbers at a cost savings of more than 70% at every point.

In terms of throughput, however, the NetScaler systems are not even in the same ballpark as NGINX Plus. Citrix artificially caps throughput on its systems, with steep pricing penalties for exceeding the limits.

To summarize the numbers:

Citrix’s tight throughput caps are even lower than some other hardware ADCs. The caps cause serious technical and business problems for owners of Citrix systems, who frequently cite them as a primary reason for switching – often quite rapidly – to alternatives such as NGINX Plus.

NGINX Plus’ far higher throughput, and even greater price‑performance numbers, give owners of our systems great freedom and flexibility in making purchasing, development, and deployment decisions.

In accordance with current SSL/TLS best practices, we used the ECDHE‑RSA‑AES256‑GCM‑SHA384 cipher suite when measuring SSL/TLS transactions per second (TPS) for NGINX Plus. The suite uses Ephemeral Elliptic curve Diffie‑Hellman key exchange (ECDHE), AES, and SHA384. We also used an RSA 2048‑bit key for valid comparison with the performance figures on the Citrix NetScaler datasheets.

The ECDHE‑RSA‑AES256‑GCM‑SHA384 cipher suite provides Perfect Forward Secrecy (PFS), which ensures that encrypted traffic this is captured now can’t be decrypted at a later time, even if the private key is compromised. PFS is becoming a ‘must have’ in the current security climate. For example, Apple is mandating that iOS9 apps communicate using PFS.

The Citrix datasheet does not reveal the cipher used, but it probably didn’t include PFS, which adds a performance penalty. Citrix NetScaler implements the ECDHE cipher in software.

Readers should bear in mind the challenge of comparing SSL/TLS performance when different ciphers offer a tradeoff between security and speed, given that the NGINX Plus systems match or outperform much higher‑priced Citrix systems in SSL/TLS performance.

Our customers report significant cost savings from switching from hardware appliances to NGINX Plus solutions with equivalent performance. Our own performance measurements and pricing analysis for Citrix NetScaler systems support this – for the simple use cases we examined, we saw between 76% and 89% cost savings in Year 1.

What makes NGINX Plus so different? We don’t bundle hardware with software, and we don’t apply an artificial throughput cap on our software. With NGINX Plus, you are free to select the most cost‑effective hardware for your needs. We don’t force you to accept hardware that doesn’t meet your company’s internal standards, nor are you obliged to overprovision hardware now in anticipation of growth in traffic or application complexity that might arise in 2 to 3 years’ time.

To gauge NGINX Plus performance for yourself, start your free 30-day trial today or contact us to discuss your use cases.

The data used to create this cost comparison was gathered from multiple sources:

The hardware used to benchmark NGINX Plus was loaned by Intel.

The following performance metrics are compared in this report:

To find out how NGINX Plus performs in your environment, start your free 30-day trial today or contact us to discuss your use cases. 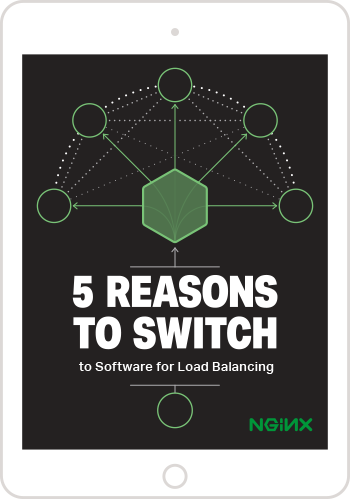