NGINX and NGINX Plus are commonly used to terminate encrypted SSL and TLS connections on behalf of upstream web and application servers. SSL termination at the edge of an application reduces the load on internal servers, simplifies certificate management, and reduces certificate costs. However, because it is extremely CPU‑intensive, it can create a scalability bottleneck that may limit growth.

Our new NGINX SSL Performance whitepaper investigates the performance of NGINX’s SSL termination under a range of traffic types and ciphers. It seeks to establish a correlation between OpenSSL benchmarks and NGINX performance, to enable users to rapidly estimate the capacity of selected hardware or virtual machines.

For example, in the tests conducted, a single virtualized Intel core could perform approximately 600 RSA 2048‑bit signs per second, and 350 full 2048‑bit SSL handshake operations per second. This equates to several hundred new users of your service per second per core. 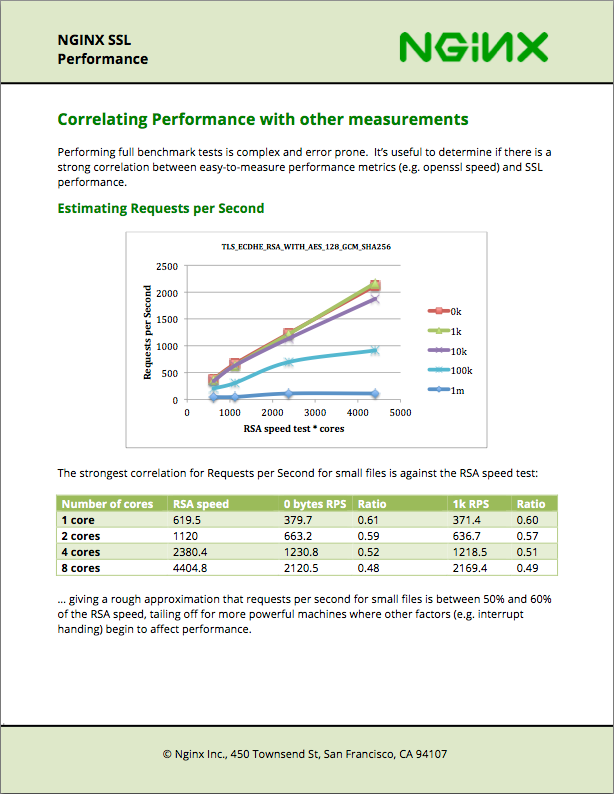 NGINX’s SSL performance scales with the number of cores available on the host server, until other limits (typically bandwidth) are met, so an 8‑core virtual machine could accept traffic from well over 1,000 new users per second and still have resources to spare.