Editor – This is the first part of a series on high‑capacity and high‑availability caching:

This post has been updated to refer to the NGINX Plus API, which replaces and deprecates the separate extended status module originally discussed here.

How can you build a large‑capacity, highly available, cache cluster using NGINX or NGINX Plus? This is the first of a two‑part series that present alternative approach to meeting this goal. You can access the second part via the link above. (Except as noted, the approaches apply equally to NGINX Open Source and NGINX Plus, but for brevity we’ll refer to NGINX Plus only.)

An Overview of NGINX Plus Caching

Content caching is a surprisingly complex topic. It’s worth familiarizing yourself with some basic caching techniques before continuing with this article:

Why Doesn’t NGINX Plus Use a Shared Disk for Caching?

Each NGINX Plus server acts as an independent web cache server. There is no technical means to share a disk‑based cache between multiple NGINX Plus servers; this is a deliberate design decision.

Storing a cache on a high‑latency, potentially unreliable shared filesystem is not a good design choice. NGINX Plus is sensitive to disk latency, and even though the thread pools capability offloads read() and write() operations from the main thread, when the filesystem is slow and cache I/O is high then NGINX Plus may become overwhelmed by large volumes of threads. Maintaining a consistent, shared cache across NGINX Plus instances would also require cluster‑wide locks to synchronize overlapping cache operations such as fills, reads, and deletes. Finally, shared filesystems introduce a source of unreliability and unpredictable performance to caching, where reliability and consistent performance is paramount.

Why Share a Cache Across Multiple NGINX Plus Servers?

Although sharing a filesystem is not a good approach for caching, there are still good reasons to cache content across multiple NGINX Plus servers, each with a corresponding technique:

Sharding a cache is the process of distributing cache entries across multiple web cache servers. NGINX Plus cache sharding uses a consistent hashing algorithm to select the one cache server for each cache entry. The figures show what happens to a cache sharded across three servers (left figure) when either one server goes down (middle figure) or another server is added (right figure).

The total cache capacity is the sum of the cache capacity of each server. You minimize trips to the origin server because only one server attempts to cache each resource (you don’t have multiple independent copies of the same resource).

This pattern is fault tolerant in the sense that if you have N cache servers and one fails, you lose only 1/N of your cache. This ‘lost portion’ is evenly distributed by the consistent hash across the remaining N –1 servers. Simpler hashing methods instead redistribute the entire cache across the remaining servers and you lose almost all of your cache during the redistribution.

When you perform consistent‑hash load balancing, use the cache key (or a subset of the fields used to construct the key) as the key for the consistent hash:

You can choose either of two optimizations to your cache‑sharding configuration. 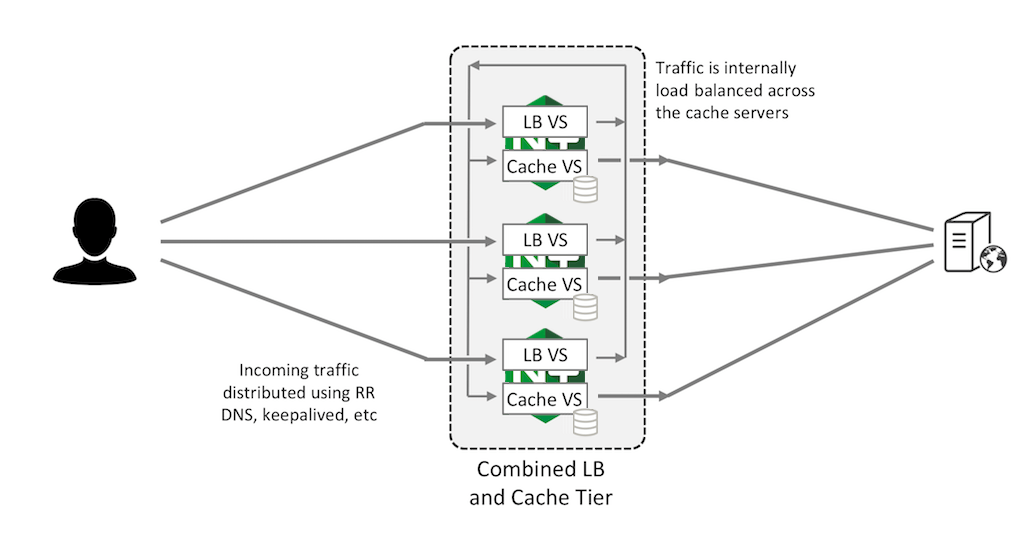 Alternatively, you can configure a first‑level cache on the frontend LB tier for very hot content, using the large shared cache as a second‑level cache. This can improve performance and reduce the impact on the origin server if a second‑level cache tier fails, because content only needs to be refreshed as the first‑tier cache content gradually expires. 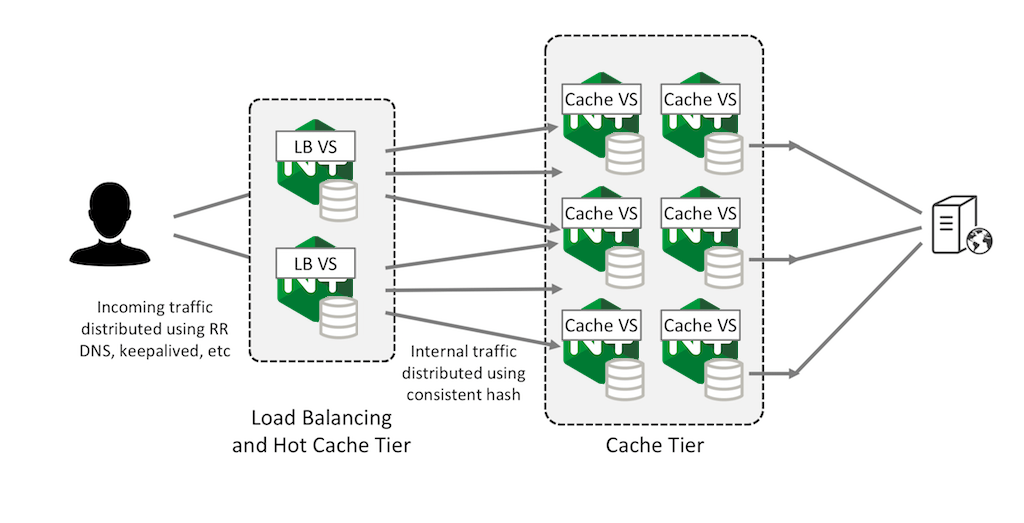 If your cache cluster is handling a very large volume of hot content, you may find that the rate of churn on the smaller first‑level cache is very high. In other words, the demand for the limited space in the cache is so high that content is evicted from the cache (to make room for more recently requested content) before it can be used to satisfy even one subsequent request.

One indicator of this situation is a low ratio of served content to written content, two metrics included in the extended statistics reported by the NGINX Plus API module. They appear in the Served and Written fields on the Caches tab of the built‑in live activity monitoring dashboard. (Note that the NGINX Plus API module and live activity monitoring dashboard are not available in NGINX Open Source.)

This screen shot indicates the situation where NGINX Plus is writing more content to the cache than it’s serving from it:

In this case, you can fine‑tune your cache to store just the most commonly requested content. The proxy_cache_min_uses directive can help to identify this content.

Sharding a cache across multiple NGINX or NGINX Plus web cache servers is an effective way to create a very high‑capacity, scalable cache. The consistent hash provides a good degree of high availability, ensuring that if a cache fails, only its share of the cached content is invalidated.

The second part of this post describes an alternative shared cache pattern that replicates the cache on a pair of NGINX or NGINX Plus cache servers. Total capacity is limited to the capacity of an individual server, but the configuration is fully fault‑tolerant and no cached content is lost if a cache server becomes unavailable.

Try out cache sharding on your own servers – start your free 30-day trial today or contact us to discuss your use cases.