A week ago we hosted our first NGINX User Summit, and it was a blast.

We started with a half day of training given by our training partner Service Rocket. Forty people new or relatively new to NGINX participated in our new “Fundamentals of NGINX” class. Three hours of “what’s a location block?”, “how do I configure an upstream?”, and setting up proxies, load balancers, and caches! It was our first step in an ongoing program of training, webinars, documentation improvements, and adding content about the many things that NGINX can do.

After the fundamentals, there was a full afternoon of talks for existing and experienced users curious about the breadth of NGINX. This included a talk by NGINX’s original author and founder, Igor Sysoev. Some of the NGINX engineeering team was in San Francisco for the summit and joined Igor on stage before his talk, NGINX: Past, Present, and Future. 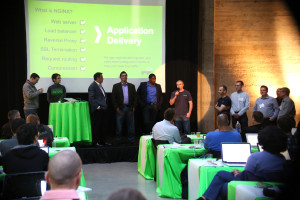 Following Igor’s talk, there was a series of lightning talks:

For those familiar with the NGINX module ecosystem, it would seem odd if we ended the day there. Amazing companies and people talked about NGINX and the many ways they use NGINX, but there is a community member and module developer who deserved the stage. We closed the afternoon’s talks with an overview of the modules that Yichun Zhang has contributed to the NGINX ecosystem. A few of the earlier lightning talks made mention of his most common modules, including Lua and OpenResty. Much of his talk centered on profiling tools for NGINX and using flame graphs to identify bottlenecks.

These talks were recorded, and we will be publishing them over the upcoming weeks. Keep an eye on our Twitter accounts @nginxorg and @nginx for those links and information about upcoming events.

I can’t close out this post without a mention of our sponsor MaxCDN – many thanks to them for the beverages during the networking happy hour.