Inside NGINX: How We Designed for Performance & Scale

NGINX leads the pack in web performance, and it’s all due to the way the software is designed. Whereas many web servers and application servers use a simple threaded or process‑based architecture, NGINX stands out with a sophisticated event‑driven architecture that enables it to scale to hundreds of thousands of concurrent connections on modern hardware.

The Inside NGINX infographic drills down from the high‑level process architecture to illustrate how NGINX handles multiple connections within a single process. This blog explains how it all works in further detail. 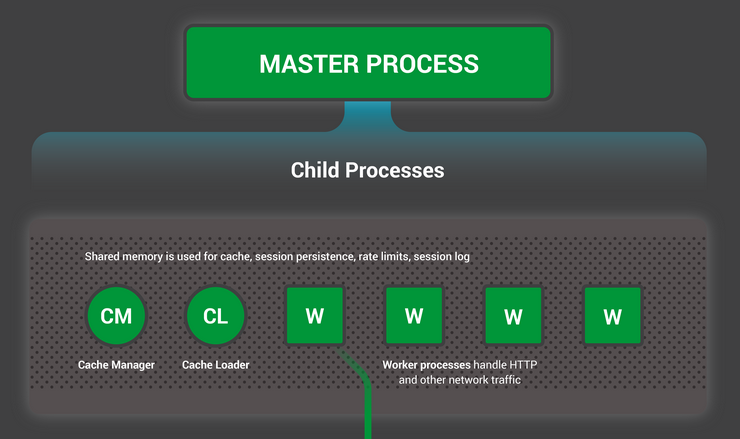 To better understand this design, you need to understand how NGINX runs. NGINX has a master process (which performs the privileged operations such as reading configuration and binding to ports) and a number of worker and helper processes.

On this four‑core server, the NGINX master process creates four worker processes and a couple of cache helper processes which manage the on‑disk content cache.

Why Is Architecture Important?

The fundamental basis of any Unix application is the thread or process. (From the Linux OS perspective, threads and processes are mostly identical; the major difference is the degree to which they share memory.) A thread or process is a self‑contained set of instructions that the operating system can schedule to run on a CPU core. Most complex applications run multiple threads or processes in parallel for two reasons:

Processes and threads consume resources. They each use memory and other OS resources, and they need to be swapped on and off the cores (an operation called a context switch). Most modern servers can handle hundreds of small, active threads or processes simultaneously, but performance degrades seriously once memory is exhausted or when high I/O load causes a large volume of context switches.

The common way to design network applications is to assign a thread or process to each connection. This architecture is simple and easy to implement, but it does not scale when the application needs to handle thousands of simultaneous connections.

How Does NGINX Work?

NGINX uses a predictable process model that is tuned to the available hardware resources:

The NGINX configuration recommended in most cases – running one worker process per CPU core – makes the most efficient use of hardware resources. You configure it by setting the auto parameter on the worker_processes directive:

When an NGINX server is active, only the worker processes are busy. Each worker process handles multiple connections in a nonblocking fashion, reducing the number of context switches.

Each worker process is single‑threaded and runs independently, grabbing new connections and processing them. The processes can communicate using shared memory for shared cache data, session persistence data, and other shared resources.

Inside the NGINX Worker Process

Each NGINX worker process is initialized with the NGINX configuration and is provided with a set of listen sockets by the master process.

The NGINX worker processes begin by waiting for events on the listen sockets (accept_mutex and kernel socket sharding). Events are initiated by new incoming connections. These connections are assigned to a state machine – the HTTP state machine is the most commonly used, but NGINX also implements state machines for stream (raw TCP) traffic and for a number of mail protocols (SMTP, IMAP, and POP3). 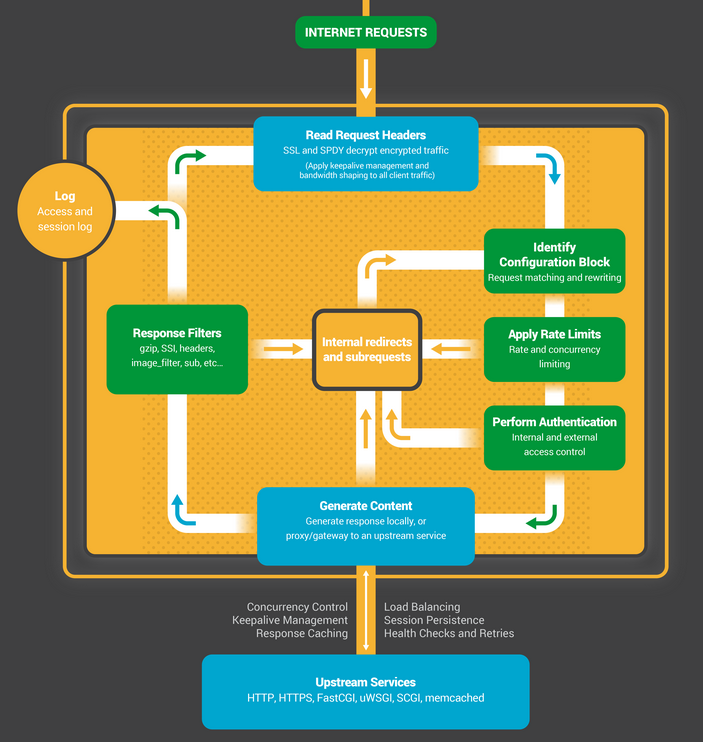 The state machine is essentially the set of instructions that tell NGINX how to process a request. Most web servers that perform the same functions as NGINX use a similar state machine – the difference lies in the implementation.

Think of the state machine like the rules for chess. Each HTTP transaction is a chess game. On one side of the chessboard is the web server – a grandmaster who can make decisions very quickly. On the other side is the remote client – the web browser that is accessing the site or application over a relatively slow network.

Recall our description of a process or thread as a self‑contained set of instructions that the operating system can schedule to run on a CPU core. Most web servers and web applications use a process‑per‑connection or thread‑per‑connection model to play the chess game. Each process or thread contains the instructions to play one game through to the end. During the time the process is run by the server, it spends most of its time ‘blocked’ – waiting for the client to complete its next move. 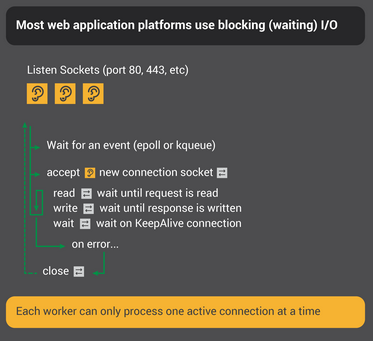 The important point to remember is that every active HTTP connection (every chess game) requires a dedicated process or thread (a grandmaster). This architecture is simple and easy to extend with third‑party modules (‘new rules’). However, there’s a huge imbalance: the rather lightweight HTTP connection, represented by a file descriptor and a small amount of memory, maps to a separate thread or process, a very heavyweight operating system object. It’s a programming convenience, but it’s massively wasteful.

NGINX is a True Grandmaster

Perhaps you’ve heard of simultaneous exhibition games, where one chess grandmaster plays dozens of opponents at the same time?

That’s how an NGINX worker process plays “chess.” Each worker (remember – there’s usually one worker for each CPU core) is a grandmaster that can play hundreds (in fact, hundreds of thousands) of games simultaneously. 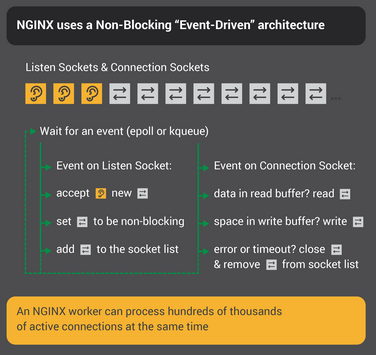 A worker never blocks on network traffic, waiting for its “opponent” (the client) to respond. When it has made its move, the worker immediately proceeds to other games where moves are waiting to be processed, or welcomes new players in the door.

Why Is This Faster than a Blocking, Multiprocess Architecture?

NGINX scales very well to support hundreds of thousands of connections per worker process. Each new connection creates another file descriptor and consumes a small amount of additional memory in the worker process. There is very little additional overhead per connection. NGINX processes can remain pinned to CPUs. Context switches are relatively infrequent and occur when there is no work to be done.

In the blocking, connection‑per‑process approach, each connection requires a large amount of additional resources and overhead, and context switches (swapping from one process to another) are very frequent.

For a more detailed explanation, check out this article about NGINX architecture, by Andrew Alexeev, VP of Corporate Development and Co‑Founder at NGINX, Inc.

With appropriate system tuning, NGINX can scale to handle hundreds of thousands of concurrent HTTP connections per worker process, and can absorb traffic spikes (an influx of new games) without missing a beat.

NGINX’s process architecture, with a small number of worker processes, makes for very efficient updating of the configuration and even the NGINX binary itself.

Updating NGINX configuration is a very simple, lightweight, and reliable operation. It typically just means running the nginx -s reload command, which checks the configuration on disk and sends the master process a SIGHUP signal.

When the master process receives a SIGHUP, it does two things:

This reload process can cause a small spike in CPU and memory usage, but it’s generally imperceptible compared to the resource load from active connections. You can reload the configuration multiple times per second (and many NGINX users do exactly that). Very rarely, issues arise when there are many generations of NGINX worker processes waiting for connections to close, but even those are quickly resolved.

NGINX’s binary upgrade process achieves the Holy Grail of high availability – you can upgrade the software on the fly, without any dropped connections, downtime, or interruption in service.

The binary upgrade process is similar in approach to the graceful reload of configuration. A new NGINX master process runs in parallel with the original master process, and they share the listening sockets. Both processes are active, and their respective worker processes handle traffic. You can then signal the old master and its workers to gracefully exit.

The entire process is described in more detail in Controlling NGINX.

The Inside NGINX infographic provides a high‑level overview of how NGINX functions, but behind this simple explanation is over ten years of innovation and optimization that enable NGINX to deliver the best possible performance on a wide range of hardware while maintaining the security and reliability that modern web applications require.

If you’d like to read more about the optimizations in NGINX, check out these great resources: