When F5 announced its intention to acquire NGINX, I wrote about how one chapter of the NGINX story was ending and the next beginning. In the almost two months since then, members of the F5 and NGINX teams have been planning how the companies will come together. All the hard work pays off today as we officially start executing our plans and authoring the new chapter together.

Let me start by reassuring everyone of a few things:

With that out of the way, let’s dig into a bit more detail. The planning process gave me an opportunity to work closely with the F5 team and reflect on what the acquisition all means for NGINX employees, users, and customers.

Here’s where I landed on culture, technology, and our future.

All the strategy in the world won’t play out if the two companies in an acquisition don’t share the same values and culture. Watching the NGINX and F5 teams planning our joint future proved to me that NGINX has found a great home. While there will always be different approaches in certain areas, the collaborative and respectful attitude on both sides has clearly demonstrated that the underlying values and resulting culture of the two companies are incredibly aligned.

To demonstrate just how aligned we are, let’s compare F5’s values to NGINX’s values as published publicly long before the acquisition. Here we combine them on F5’s BeF5 diagram: 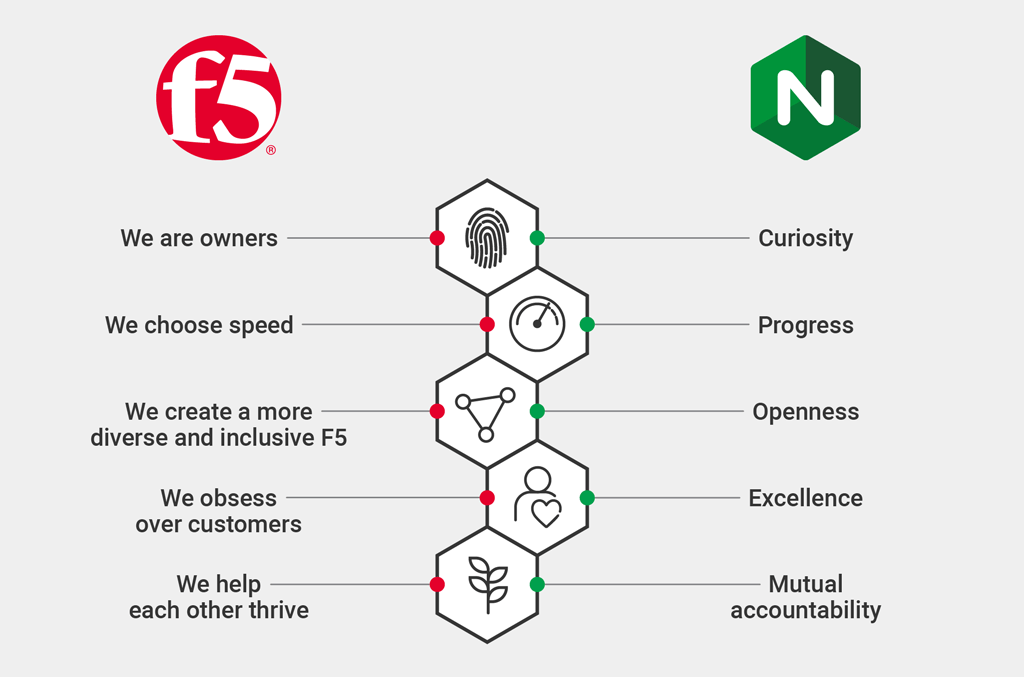 As you can see, there is a nearly perfect one-to-one correlation of F5’s values – being owners, choosing speed, creating diversity, obsessing over customers, and helping each other thrive – with NGINX’s values of curiosity, progress, openness, excellence, and mutual accountability.

I knew before the acquisition was announced that F5 and NGINX professed the same values, but I can now attest that we both actually live them.

As it is the most important issue for many people, I’ll state it again: F5 is fully committed to open source, which has been core to NGINX throughout its history, starting with Igor Sysoev’s first release of NGINX code in 2004 and continuing with the release of NGINX Unit in 2017. We know the proof will be in the proverbial pudding on this one, so let our actions speak for us over the coming months and years.

As for the commercial products, we have created a shared vision for improving them:

We’ll have a lot more to say regarding our open source and commercial offerings at NGINX Conf 2019 in September. Join us in Seattle to be among the first to see the technology in action.

Shared Vision of The Future

New technology is exciting in itself, but even more so as part of an integrated gameplan. Where is NGINX heading as part of F5?

I remember my very first meeting with François Locoh-Donou. We were eating dinner in Japan. It took all of five minutes before we were discussing our shared vision for the future of applications and application infrastructure.

We envision modernized legacy applications and new architectures for future applications – all with the clear goal of bringing greater agility to developers, an amazing experience to the application users, and underlying security to protect both users and data.

We envision a single application platform that spans from code – including the web and app servers that execute your application logic – all the way through the delivery, API, and security technologies needed to deliver that code to a customer.

We envision a company that is more than just an application delivery and security vendor, but rather a company poised to disrupt the networking, middleware, and microservices markets.

Join Us in Writing the New Chapter

It really is an exciting time here in the NGINX business unit.

The technology, people, brand, and community are thriving. Just last month NGINX became the most used web server in the world for the first time ever! We have the corporate backing and shared vision of F5. And we have the freedom and additional resources to build new and innovative products that will accelerate the modernization of existing applications as well as development of new applications.

We’re already hard at work on these new products. Your first opportunity to learn more is our upcoming webinar entitled Bridging the Divide: Modern App Development with F5 and NGINX. Learn more and register now to hear from experts from both F5 and NGINX on how we are better together and our vision for creating new technologies.