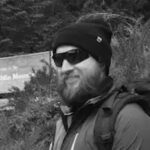 In this article I’m sharing an example of how to use NGINX Amplify as a visualization and reporting tool for benchmarking application performance. The primary focus is measuring the effect on performance of keepalive connections.

Keepalive connections can significantly boost performance, but only if they’re reused extensively enough to sharply reduce the need to create new connections, which are computationally expensive to set up. The performance boost from using keepalives is increased when SSL/TLS is in use, as SSL/TLS connections are even more expensive than insecure connections. (In fact, because keepalives can so greatly reduce the performance penalty otherwise incurred when using SSL/TLS, the extensive use and reuse of keepalives can make the difference as to whether SSL/TLS use is practical or impractical on a website.)

The HTTP Keepalive Connections and Web Performance blog post covers a variety of topics related to the internals of the TCP protocol, as well as a number of common problems, and how to troubleshoot them – including a useful definition of keepalive connections:

The Overcoming Ephemeral Port Exhaustion in NGINX and NGINX Plus blog post describes how to make NGINX reuse previously established TCP connections to upstreams [in this case NGINX or NGINX Plus is the client]:

There are two common cases where an upstream keepalive pool is especially beneficial:

Other beneficial side effects of using upstream keepalives include reducing the number of sockets in TIME‑WAIT state, less work for the OS to establish new TCP connections, and fewer packets on the network. However, these are unlikely to result in measurable application performance benefits in a typical setup.

While using keepalives can be useful, configuring them is usually a bit complex and error prone. We‘ll use Wireshark to inspect the low‑level network elements, such as TCP streams and their connection states.

To measure the TCP connection time, we’ll configure an NGINX container with the NGINX Amplify agent to collect all necessary data. We’ll then use NGINX Amplify to analyze this data. We’ll use siege as the HTTP benchmarking tool with the following configuration (in ~/.siege/siege.conf):

We’ll begin with showing the benchmark results in the NGINX Amplify dashboard, and then explain them. This will give you some context about the focus of this exercise.

The testing scenario was to run a series of five siege tests initiated from inside the NGINX container, with each test taking 10 minutes to finish. The tests correspond to scenarios A through E discussed below.

In this case, we broke a rule of performance testing by running the load generator on the system under test, with the risk of distorting the results. To reduce this effect, we isolated resource use by running and inspecting the traffic in Docker containers. Also, there weren’t many locking operations such as I/O, which both use lots of time and have significant variability unrelated to the system aspects being tested. The fact that the results were pretty consistent seems to indicate that we were able to get relatively “clean” results.

For each metric, three measurements are shown: 50pctl (median), 95pctl, and max. The top four graphs are metrics where lower values represent better performance. The bottom two graphs are traffic‑volume metrics where higher values are better. 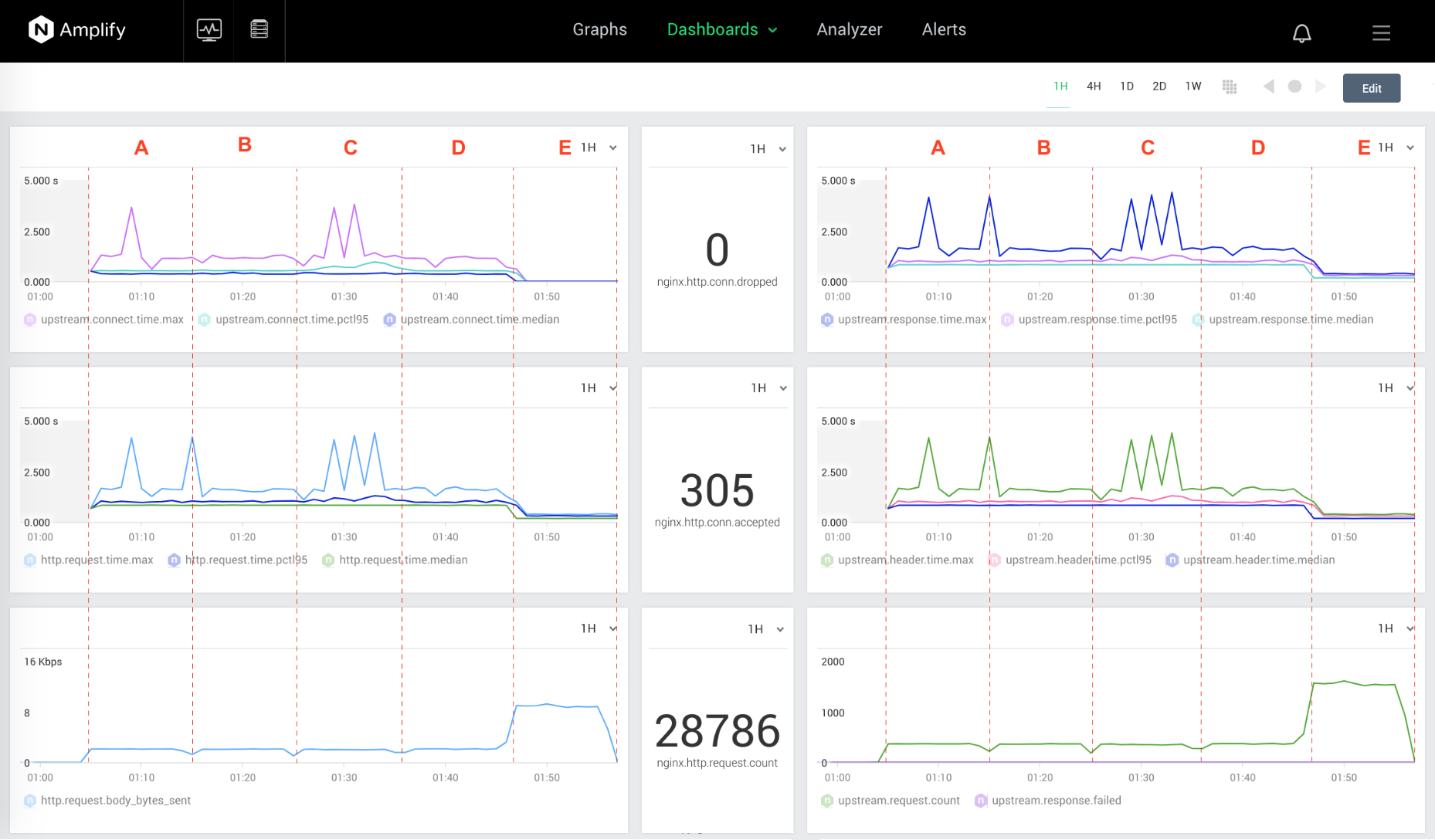 The next screenshot zooms in on the two most important metrics for measuring upstream keepalive performance, upstream.connect.time and upstream.header.time (these correspond to the top‑left and middle‑right graphs in the previous screenshot):

The NGINX Amplify agent was downloaded from the official repo and installed in the NGINX container:

Every run of the siege benchmark requires two TCP streams: one siege ↔ NGINX and the other NGINX ↔ upstream backend server.

We analyzed the upstream keepalive TCP streams in each of five configuration scenarios (A through E). For the complete NGINX configuration snippets and Wireshark dumps (which also appear below), see this GitHub gist.

Scenarios A, B, and D were tested against an upstream backend server (also running NGINX) configured as follows to disable keepalive connections:

Scenarios C and E were tested against an upstream backend NGINX server configured as follows to enable keepalive connections, also increasing their duration and the maximum number of requests serviced over a given connection (the defaults are 75 seconds and 300 respectively):

To run Wireshark, we used a tcpdump Docker container and a copy of Wireshark installed on MacOS:

Let’s take a look at the TCP streams between the NGINX proxy and the upstream server for each of the above‑mentioned scenarios. 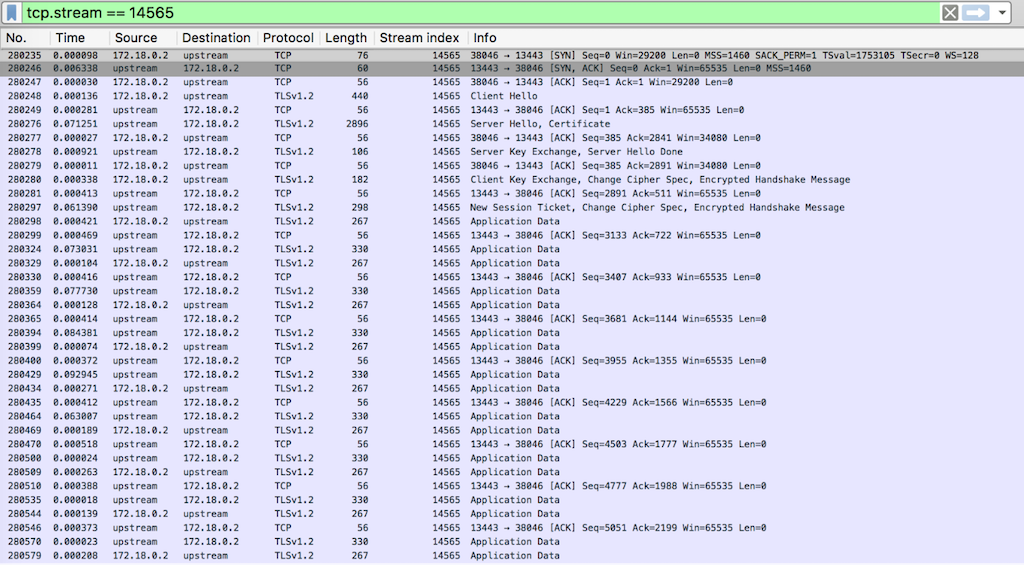 According to Section 3.5 of RFC‑793: A TCP connection may terminate in two ways: (1) the normal TCP close sequence using a FIN handshake, and (2) an “abort” in which one or more RST segments are sent and the connection state is immediately discarded. If a TCP connection is closed by the remote site, the local application MUST be informed whether it closed normally or was aborted.

Here’s the Wireshark I/O graph, with the TCP congestion window in dark green, and bytes‑in‑flight in light green: 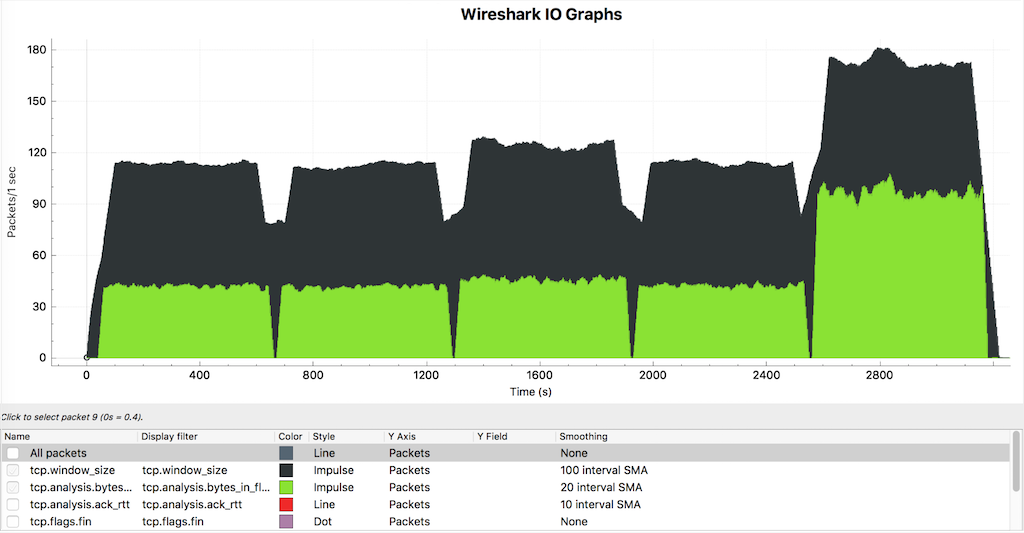 For the loaded server, the testing scenario was to run two siege tests sequentially, again initiated from inside the NGINX container. This time each test took about 20 minutes to finish. The tests correspond to scenarios A and B discussed below.

This screenshot shows graphs for the same six metrics as above, this time for the two new scenarios with a heavily loaded server: 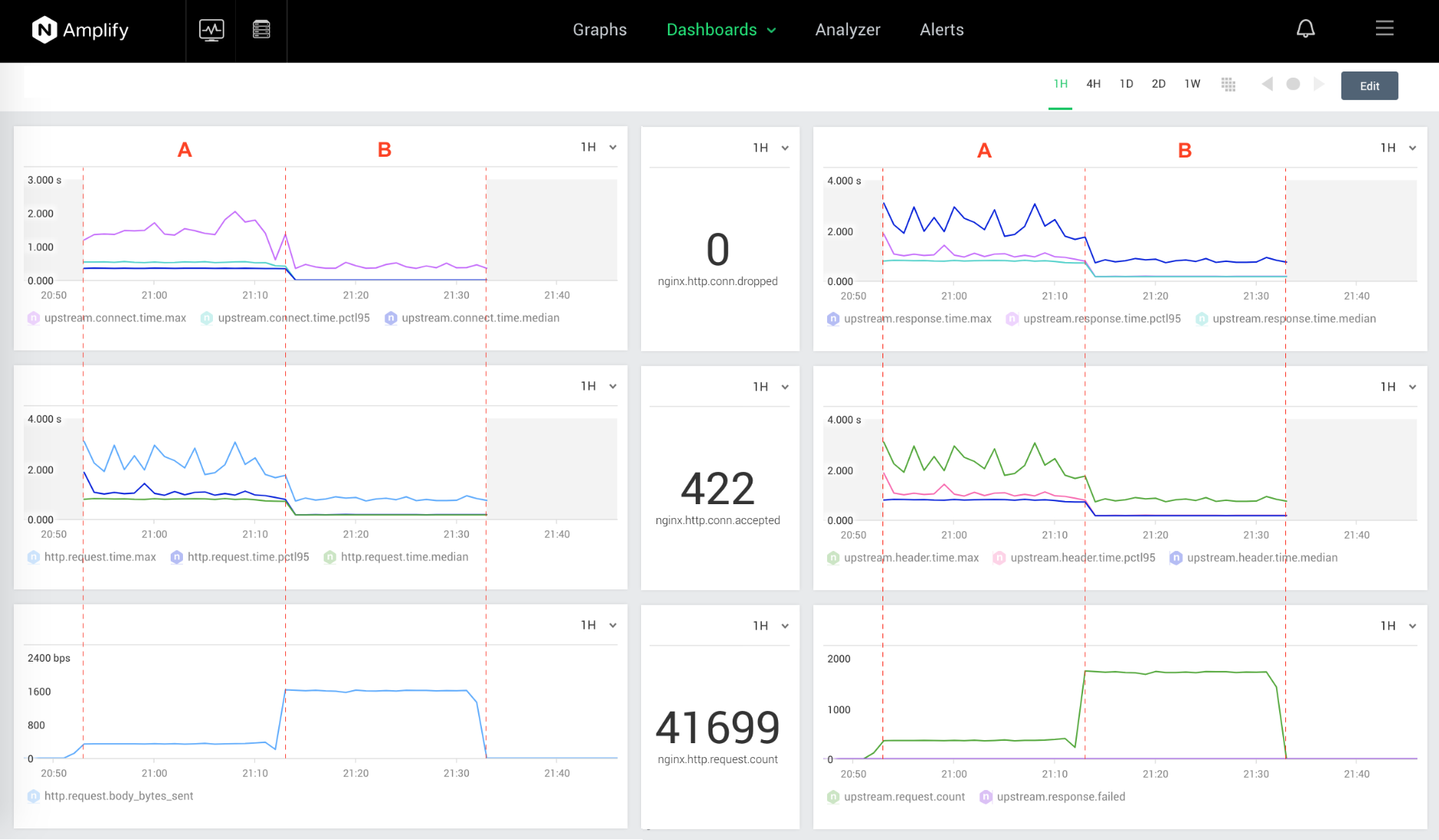 One key result appears in the bottom right graph: with keepalive connections between the NGINX proxy and a heavily loaded backend located far away (Scenario B), the throughput jumps nearly five times compared to no keepalives (Scenario A): upstream.request.count increased from 370 to 1731 requests per minute.

And again let’s zoom in on the two most important metrics, upstream.connect.time and upstream.header.time.

Note that in Scenario B (keepalive connections), the value of upstream.connect.time (the max value out of the statistical distribution collected) is evenly distributed. However, it’s not a zero as it was in the parallel scenario with an idle server (Scenario E above), because the server’s keepalive_requests are configured to 300, and we see FINs followed by SYN/ACKs; we didn’t see that as often in the previous tests, when keepalive_requests were set to a higher value. But given the number of siege runs, we see the 95th‑percentile and the mediam (50th‑percentile) values are 0, which saves client and server resources on the SYN/ACK handshake and the TLS exchange.

In Scenario B, the 95th‑percentile and mean (50th‑percentile) values are same for both upstream.connect.time and upstream.header.time. It’s a very interesting fact, which can possibly be interpreted this way: by reducing the round‑trip time (RTT) we have less connection overhead, and that provides more consistent response time.

The Wireshark TCP streams analyses are very similar to those with the idle server: 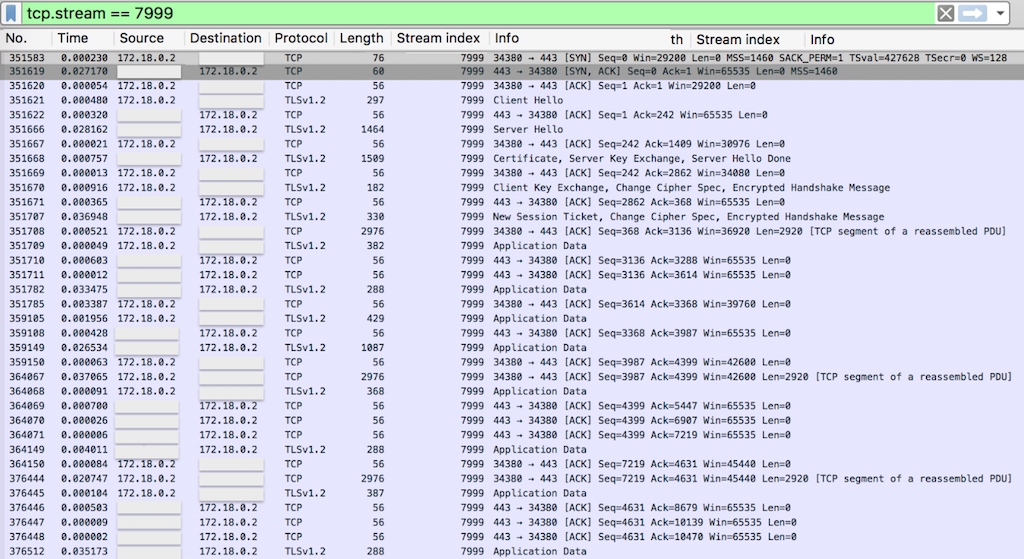 The I/O graph looks similar, too: 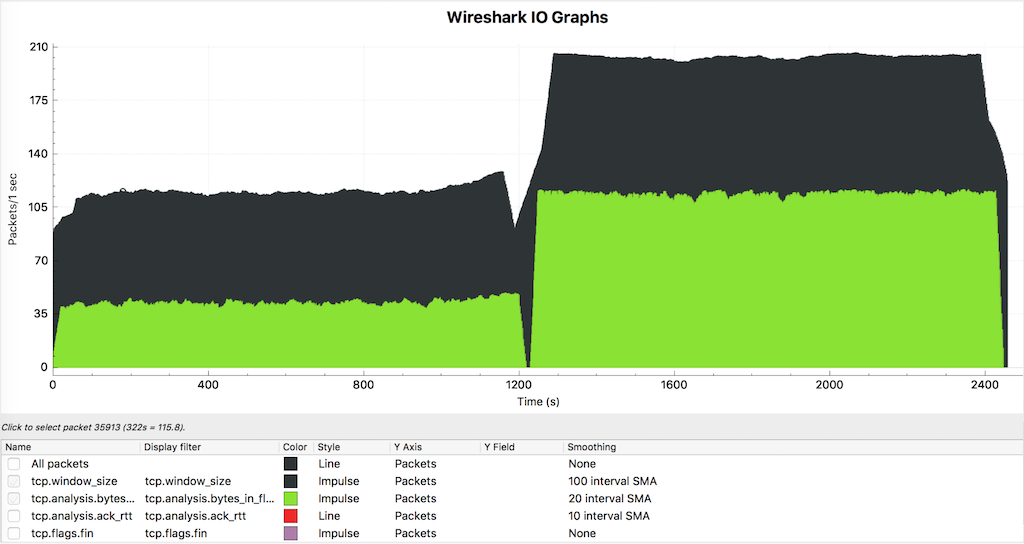 As an extra benefit, in a situation where you have more than one upstream backend server, you can use the least_time directive to avoid querying the slower origin server. [Editor – The Least Time load‑balancing method is available in NGINX Plus.]

To summarize our findings from this testing effort:

NGINX Amplify is free for up to five monitored instances of NGINX or NGINX Plus. Sign up to get started. 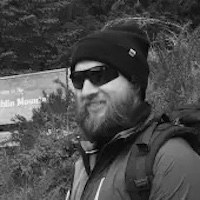