Cache Placement Strategies for NGINX and NGINX Plus

In the previous article in this caching series, we looked at the benefits of microcaching – caching dynamic content for very short periods of time – which sometimes leads to very significant performance improvement. In this article, we’ll consider another aspect of caching, that of cache placement, and we’ll look at strategies for dealing with slow cache storage.

NGINX can manage multiple cache locations, each mapped to a different filesystem location, and you can configure NGINX to choose which cache to use on a per‑request basis.

In the following sample configuration, the proxy_cache_path directives create two caches, ssd_cache and disk_cache, mounted on the local directories /mnt/ssd/cache and /mnt/disk/cache respectively. The map directive inspects the request URL and selects disk_cache for all requests that appear to be video downloads (have .mp4 or .avi in the URL). The default ssd_cache location is selected for all other requests.

Note: For a simple deployment, you could create separate location blocks for different URLs and use the proxy_cache directive within each to specify a different cache location.

Where is Cached Data Stored?

NGINX and NGINX Plus utilize a hybrid disk‑and‑memory cache. Whether the cache is on disk, in SSD, or elsewhere, the operating system page cache brings a cached item into main memory when it’s requested. The cached content that was requested least recently is swapped out when memory is required for other purposes. The operating system actively manages the page cache to take advantage of unused main memory on the host.

Metadata about cached content is always stored in main memory, in a shared memory zone accessible by all NGINX worker processes on the host. The zone is allocated with the keys_zone parameter to the proxy_cache_path directive. The NGINX cache_loader process initializes the metadata at startup.

Can I Use tmpfs for Caching?

It is possible to cache to tmpfs – a transient in‑memory filesystem – but that brings some challenges, beyond the obvious lack of persistence across reboots.

tmpfs filesystems are by necessity small because they are limited by the available RAM. NGINX can overfill the cache, because the worker processes add new resources to the cache, and the cache manager process then prunes the cache in the background to maintain the configured max_size. Therefore, it’s necessary to allow for spare capacity when sizing a cache, and this can be wasteful on a small cache file system.

Furthermore, tmpfs filesystems are swapped out to disk when memory is constrained. The memory used by a tmpfs cache could just as effectively be used by the page cache for a larger on‑disk cache.

Valentin Bartenev’s blog about thread pools describes in detail how to accelerate read operations with NGINX and NGINX Plus. Although the blog was written from the perspective of web serving, the results are directly applicable to a read‑only cache workload.

If content is available in main memory (because it was recently used or written to cache), cache read operations are immediate; if content is not in main memory, NGINX generally blocks while the content is retrieved from storage. The thread pools feature mitigates this problem by handing the blocking read operation over to an aio thread so that the main NGINX worker thread is not blocked. In the use case described in Valentin’s article, we saw a 9x performance improvement for hot content.

Testing the Effect of Disk Configuration on Cache Write Operations

For the rest of this article, we’ll look at a different kind of workload, dominated by cache write operations, and see how the disk choice affects cache throughput. Disk speed does not just limit the rate at which new content can be added to the cache; the NGINX worker threads can block when the page cache can’t commit new content to disk fast enough, and that can limit overall throughput.

The goal of our tests was to investigate strategies when writing to slow disks.

The second test system was a faster bare‑metal server with local hard drives.

We used wrk to generate load. The wrk client ran the following script called request.lua, which configures wrk to generate requests for randomly named files and distribute them across all NGINX workers:

On the content generator, we configured NGINX to return the same 1 MB file for all requests:

First we ran a wrk test without caching to determine the maximum capacity of the system.

The aggregate throughput on the EC2 instance (for client, proxy, and content generator combined) was about 486 MB/second (3.9 Gbps) on the AWS server:

We then tested four different configurations of disk volumes:

To implement the Mirror and Stripe strategies, we used Linux LVS to arrange partitions on the two disks in either a mirror or stripe layout.

To implement the Hash strategy, we included the split_clients directive in the NGINX configuration. This configuration splits cached content evenly between the two caches created by the proxy_cache_path directives, one on each physical disk:

We tested the four strategies on both the Amazon EC2 server (where we expected slow and unpredictable disk speeds) and on the faster bare‑metal server.

During all of the tests, disk I/O was the limiting factor, and iostat illustrated (within sampling bias) the load on individual physical and virtual disks. For example, this output shows activity when testing the Stripe strategy, represented by the virtual dm‑0 device backed by the physical xvdb and xvdc devices:

We obtained the following results by averaging across a large number of test runs (20 or more) for each strategy. The results from the EC2 tests showed wide variability, whereas the bare‑metal tests were much more consistent once the system reached a steady state:

Disk I/O adds a lot of unpredictability to the system performance, and we took care to ensure that the caches were flushed and empty before each test run.

The NGINX cache_manager process runs regularly and is responsible for pruning the cache in the background. Because the cache was being filled so quickly, cache_manager had to trim the cache aggressively to keep it within limits and make a measurable impact on performance.

We used NGINX Plus’ live activity monitoring dashboard (backed by the NGINX Plus API module) to monitor cache usage in real time, making sure that the caches did not fill completely during the tests: 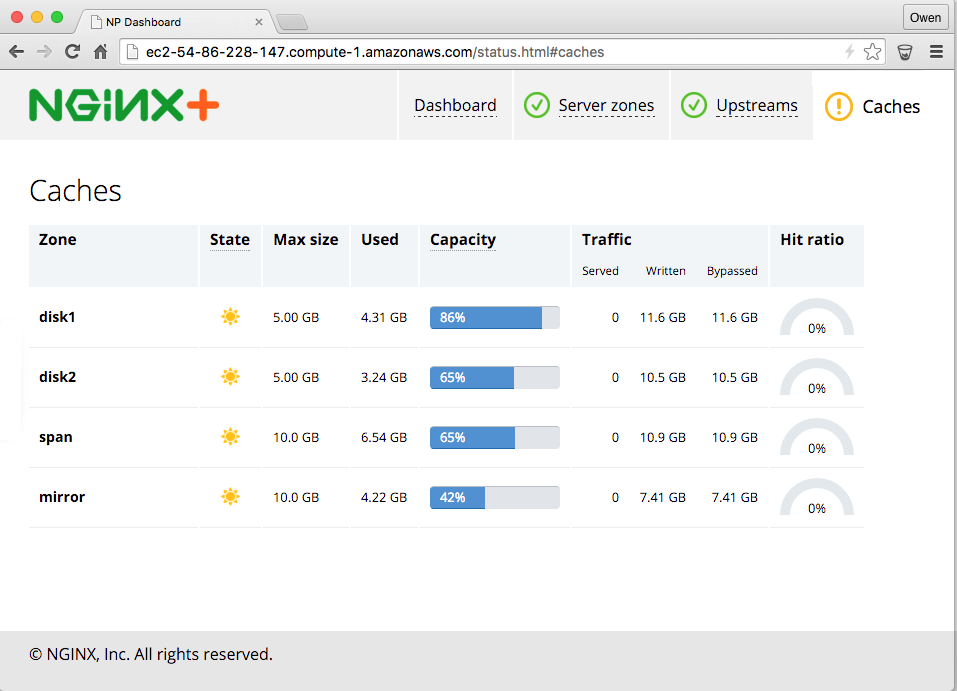 The hit rate reported on the dashboard never went above 0%, confirming that the load generator was creating random, nonrepeating URLs.

The goal of this artificial benchmark is to test the performance of different cache configurations; the test fills the cache as quickly as possible with 1 MB files that are never requested again after the first time (no reuse, which is highly artificial).

The simple Single Disk strategy is the baseline against which we can compare the more complex arrangements.

Not surprisingly, the Mirror strategy was marginally slower that Single Disk. Even though the writes can be done together between the two physical disks, Mirror incurs a small amount of overhead. Nevertheless, you might wish to use a mirrored arrangement so that your cache is not vulnerable to the failure of a single disk.

Stripe and Hash are both faster than Single Disk. The Hash results are higher than expected (more than twice the speed of Single Disk) but the tests were consistent and easily replicated. Hash appears to be marginally faster than Stripe.

Want to try out caching strategies with NGINX Plus in your own enviroment? Start your free 30-day trial today or contact us to discuss your use cases.